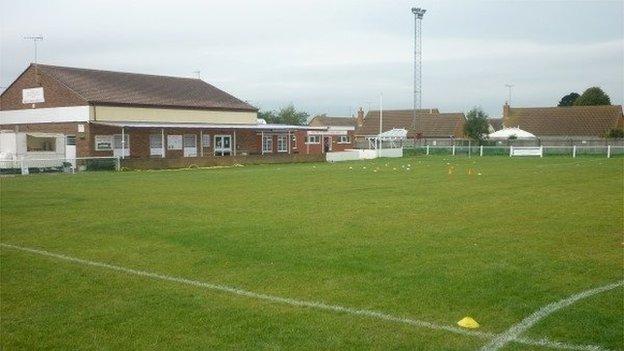 The Essex club hope to erect the stand in time for their FA Vase fourth-round tie against Bodmin on Saturday.

"We actually spotted the stand on eBay two years ago and we've been tracking it ever since," club chairman Terry Doherty told BBC Essex.

"Luckily it was still there and we're hoping to pick it up from the Isle of Wight."

The stand has been taken apart and will be brought on a truck to the town, 10 miles south of Colchester, and put up on Friday in time for the weekend's game, which is being billed as the biggest in the club's history.

Brightlingsea, who attract more than 100 spectators a game, were promoted to the Eastern Counties League Premier Division, the ninth tier, last season.

Their North Road ground has a 50-seat stand, but the club need to increase that to 100 by the end of March to meet league requirements.

The new stand takes their seating capacity to 157, which will also satisfy the standards of the league above, should the R's, who are currently sixth in the table, win promotion again.

"After getting promoted, we realised we had to do something," said Doherty, who said the stand had only been used once - and that was at a tennis tournament.

"Thanks to the Vase run and sponsorship and some fundraising, we've managed to find the money to pay for it.

"We will easily fill it. It's more comfort for the fans and you want to make it a good day out for them."

Victory over Bodmin would put Brightlingsea into the last 16 of the FA Vase - a competition for amateur teams from the ninth tier of English football and below - and three games away from a Wembley final.

"It is arguably the biggest game in our history," said Doherty. "We're really excited and would love to get through to the last 16."

Doherty also hopes to purchase turnstiles from the old Walthamstow greyhound track, which closed in 2008.