Manchester City will win the Premier League this season and buoyed by the best strike force in Europe, they could trump Manchester United's treble in 1999 by winning a historic quadruple.

As United won the Champions League, FA Cup and Premier League at the end of the 1990s, their local rivals City were defeating Gillingham in the third-tier play-off final at Wembley.

This week City boss Manuel Pellegrini said he wanted to mark his debut season in England by winning four trophies - the Champions League, the Premier League, the FA Cup and the Capital One Cup. If they do, his strike trio of Alvaro Negredo, Sergio Aguero and Edin Dzeko will have been a major factor.

With 99 goals in just 33 matches this season, City will reach a century eight games quicker than any side in Premier League history if they score against Cardiff on Saturday.

That shows the strength of City's attacking talent and with their three strikers seemingly pushing one another to reach new heights, I think the quadruple is not out of the question.

The Spaniard is the nearest thing to an old fashioned number nine that the Premier League has had since the retirement of Alan Shearer in 2006.

At Real Madrid, Negredo did not play a competitive minute, but a loan spell at Almeria followed by four seasons at Sevilla have honed a player City fans have christened 'The Beast' into someone whose game perfectly fits English football.

If I had to pick one of City's strikers to stay at the club the longest, it would be him.

Physically he lives up to his nickname and is very similar to Shearer. He has desire, pace, aggression. And he sprints into the box as if all he can see is the ball and the goal - I have only seen Shearer do that.

There has been no easing-in period for the Spaniard either, as he has played more minutes than any striker at the club this season.

His desire, coupled with Pellegrini's faith in him, has paid off for City.

An eagerness to lay off the ball and dart into the box has helped him to 21 goals in all competitions in his debut City season. With 17 of them coming at the Etihad Stadium, it seems he feels at home in Manchester.

At £22m, City picked him up for £4m less than Tottenham paid for Roberto Soldado. It is safe to say City got the better deal.

Rather like Shearer, Negredo must be a nightmare to play against. 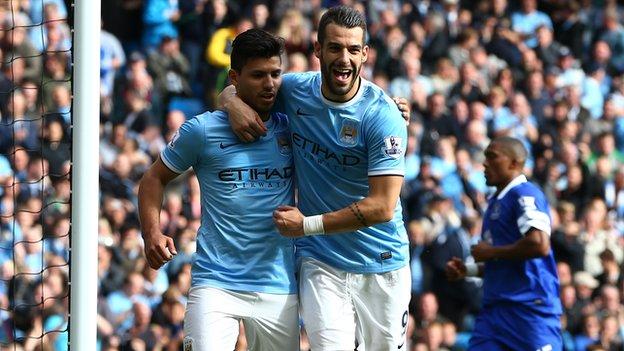 Argentine Aguero is undoubtedly one of the best strikers in the history of the Premier League.

As we saw when he scored the goal against QPR that so dramatically clinched the Premier League title in 2012, Aguero is a deadly finisher.

It is no surprise that, with 60% of his shots hitting the target this season, he is City's most accurate striker.

A month on the sidelines with a calf injury was swiftly put behind him when he scored within a minute of his second-half introduction against Blackburn in the FA Cup on Wednesday, nudging him to 16 goals in 14 games.

His movement is superb, his low centre of gravity makes him a nuisance and he is dynamic. The 25-year-old has an eye for a goal, gets in the box and with three Premier League assists, he is the most creative of City's front men this season.

Aguero has a good partnership with Negredo and I expect this to flourish and develop even more.

They have an instinct that cannot be taught. The top players know exactly where their team-mates are.

I was taught as a kid that at any point in a game, if the manager shouts 'stop', you should be able to name exactly where every player is stood behind you. If you stopped the game at any point, Negredo or Aguero would be able to do it. It is the sign of a good player.

With 67 goals in 109 appearances for City, it is beyond question that Aguero is world class.

And when he decides to leave England, I think the mark he will have left on City and the league in general will be up there with Shearer, Thierry Henry, Michael Owen and other top strikers.

He is quite simply different class.

I think Dzeko is very unfortunate. I say that because with Negredo and Aguero at the club, he has two world-class strikers in front of him.

Manchester City's strikers have scored 46% of their sides' goals this season. Manchester United boast a Premier League high with their forwards hitting 71% of their goals while Chelsea are least reliant on their front men (20%).

What would some sides, including City's title rivals Chelsea, give to have a striker who has scored 15 goals in 26 Premier League appearances?

As we saw in the first-half of City's FA Cup win over Blackburn, he can be wayward on occasion with his shooting.

The stats show that his average of 6.2 shots for every top-flight goal he scores makes the Bosnian the most inefficient striker of the key three at City this season.

So it is perhaps understandable that he is often viewed as City's Plan B - but he is some Plan B.

He is superb in the air and offers something different to Negredo and Aguero. At a time when rotation at the top clubs is important, he is a great player to have in reserve.

In all, 13 of his 35 Premier League goals since arriving in Manchester in January 2011 have come as a substitute.

Only Ole Gunnar Solskjaer, Jermain Defoe and Kanu have scored more goals from the bench, but for me, Dzeko should not be viewed purely as an understudy.

He has proved he can do it from the start of games, a feat which shows he has more about him than Javier Hernandez at Manchester United - and he provides more evidence of the flexibility which I believe will see City win the Premier League.

When I played for Birmingham under Steve Bruce, he told me any side is only as good as its strikers. By that measure, City are some side.

Only Liverpool have had more shots on goal this season and with 21.3% of City's shots finishing in the net, no side is more deadly when opportunity strikes.

But every striker needs someone to craft an opening for him and City have an embarrassment of riches in that department. City currently have eight players among the top 40 on the Premier League's assists table.

Many players just smash balls at team-mates, but City's creative midfielders always pass the ball in front of their forwards, allowing them to break quickly as a unit. They boast players whose perception of a pass is far greater than that of an average Premier League footballer.

In contrast to what was said about Roberto Mancini, Pellegrini seems to be willing to put an arm around his players and encourage them to try again if they make mistakes.

It is paying off. His side are potent and if that continues, his arms could well be wrapped around four trophies by May.