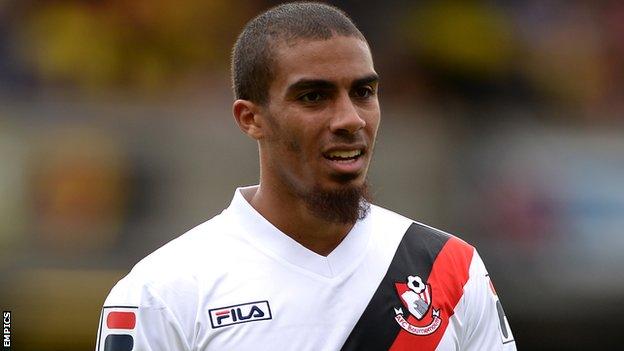 Bournemouth striker Lewis Grabban is in talks with Brighton & Hove Albion over a potential move to the Amex Stadium.

The Seagulls are reported to have matched a buy-out clause in the 26-year-old's deal with the Cherries.

"It's not ideal for us, but there is nothing we can do unfortunately.

"We have to wait and see what happens and what Lewis decides he wants to do and then move on. The club will always move on and build again," Bournemouth boss Eddie Howe told BBC Radio Solent.

Grabban joined Bournemouth from Rotherham for a fee of £300,000 in the summer of 2012 and has scored 10 goals in 25 appearances for the Dorset club this season.

He signed a new three-year deal in November and on Wednesday, Howe said he wanted to keep the former Millwall and Brentford man at the club during this month's transfer window.

"It is a disappointing thing to happen at this stage of the season, but we are powerless to do anything about it," Howe added.

"We have had our eyes on the market and were aware this could happen but it's been incredibly hard, hence why the demand for strikers is so high.

"There are very few quality strikers to choose from who are available. I still believe we have some very good strikers at the football club so if we don't find anyone, then we will see.

"Any potential investment has to be good value for money and with an eye on the future."