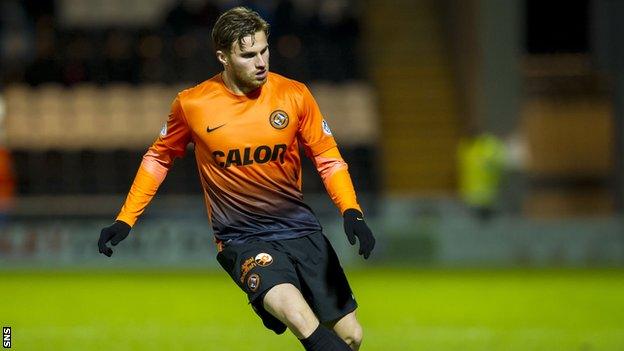 Goodwillie, 24, is back at Rovers following a loan spell at former club Dundee United.

Saints are thought to be vying with Premiership rivals Aberdeen in their attempts to entice Goodwillie north.

"David has to take a few days to decide where he wants to go. Even staying at Blackburn may be an option for him," said St Johnstone boss Tommy Wright.

Saints are keen to recruit Goodwillie but Wright stressed there was a limit to what they could offer the striker.

"We have made an inquiry and Blackburn are fully aware of what we are prepared to go to in terms of what we can afford in wages," said Wright.

"He might want to stay in England. I have spoken to David and he was quite impressed with the club.

"It was a good meeting. He is a really nice lad and his advisors were there too.

"He is based in Stirling and we train there, so logistically it would be good for him.

"So, if he comes back to Scotland we would have a very good chance of getting him."

Blackburn manager Gary Bowyer has admitted another spell on loan is a possibility, while Goodwillie's agent Ricky Gillies says the striker's preference is to fight for a first-team place at the club.

Goodwillie, who won the Scottish Cup with United in 2010 and scored 40 goals in 136 games for the club, moved to Ewood Park a year later for a fee in excess of £2m.

However, he struggled to make an impact at the Championship club, making only 10 starts and, after rejoining United in July, scored six goals in 22 appearances before they decided against extending his loan.