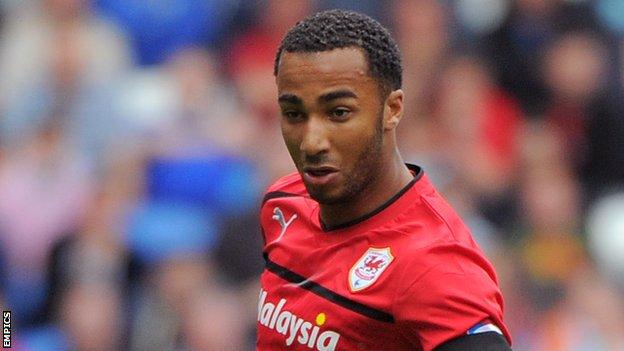 Cardiff striker Nicky Maynard has joined Championship side Wigan on loan for the remainder of the season.

The 27-year-old has struggled for regular football since suffering a in September 2012, shortly after his move to Wales.

He is expected to be involved for Wigan at Doncaster on Saturday.

The former Crewe Alexandra, Bristol City and West Ham United front man will fill the void left by to Aston Villa, which was completed on Tuesday.

"Nicky is at the stage of his career where he wants to play regular football again after his injury last season," said Rosler. "He wants to prove a point to himself and also to other people.

"That's a perfect scenario for us. It matches our ambitions. I will be patient with him because he has not played in a while. But he's fit, and he's ready to go."

Maynard's injury limited him to four appearances last season as the Welsh club won the Championship title. A further 10 outings have followed in 2013-14, with his only goal this term coming in the League Cup second round at Accrington in August.

Maynard did not feature in either of Ole Gunnar Solskjaer's first two games as Cardiff boss, with Peter Odemwingie, Fraizer Campbell and Andreas Cornelius all selected ahead of him.