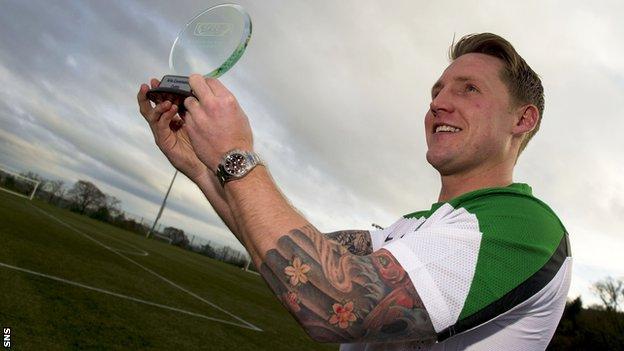 Kris Commons believes his excellent form for Celtic has been aided by his retirement from the Scotland set-up.

The 30-year-old playmaker, who called time on his international career last year, is the SPFL Premiership player of the month for December.

"Without that distraction, it has certainly helped me," said Commons.

"When you have other directions and other aspects of your game you have to concentrate on, and travelling, it does take it out of you."

Commons scored twice in 12 appearances for Scotland before announcing that he no longer wished to be considered for selection in May - though he has not ruled a return to Gordon Strachan's squad.

"I am 30 years old now and I am in the position where I can solely concentrate on Celtic and get the best not only for myself, but for the team as well.

"I have been out of [the Scotland set-up] for the best part of six months and I haven't played as good and probably never scored as many goals at club level.

"When your sole purpose is concentrating on Celtic then you tend to play your best football.

"I would never say never [to returning] but at this moment in time, I have a four-year-old, a three-year-old and a one-year-old, and when I am not playing with Celtic it is about spending as much time as I can with my kids.

"Last season I scored one goal in the whole campaign so it is about keeping my feet on the ground and accepting that sometimes I won't get the chances in games that I deserve.

"But hopefully they will keep coming my way and I will keep putting them in the back of the net."

Commons, who has 16 goals for the season, began December with a hat-trick in the 7-0 Scottish Cup win against Hearts and followed up with a double in the league win at Motherwell.

He also found the net in the 2-0 league win at home to Hearts later in the month to continue his scoring run.

And the midfielder, who joined Celtic for £300,000 from Derby County in 2011, also scored the winner against Inverness.

Meanwhile, Celtic boss Neil Lennon revealed there has been little progress in his bid to keep Georgios Samaras and Joe Ledley, both of whom are out of contract at the end of the season.

"We don't know were we are with Georgios at the minute, we still haven't a definitive answer either way," explained Lennon.

"The signs with Joe are more positive but again, we have no confirmation of that.

"There is no deadlines but the longer it drags on the more speculation there will be about the two of them and obviously we can do without that at the minute."