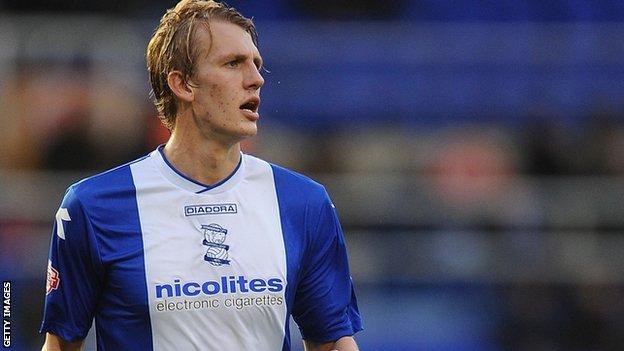 Birmingham City look likely to fail in their attempts to bring back Fulham central defender Dan Burn to St Andrew's on loan.

Burn, 21, started all but one of Blues' first 24 Championship matches after arriving in July on a season-long loan.

But he was recalled by his parent club, so that new head coach Rene Meulensteen could take a look at him.

And Blues boss Lee Clark now admits: "It doesn't look like Dan is coming back. He is going to stay at Fulham."

Blues lost for the first time in 11 matches - their first game without Burn - at Brighton on Saturday. But Clark's side coped well without him in the FA Cup against Bristol Rovers on Tuesday night, as 35-year-old Paul Robinson and 34-year-old Hayden Mullins again filled the twin central defensive roles.

There was even the added bonus of Robinson scoring his first goal in five years to set his team on the way to a 3-0 victory.

But, with no other options after losing Kyle Bartley with a hamstring injury, Clark admits that Burn's solid form for Blues has ultimately counted against them.

"He's been playing too well," said Clark. "And that is a double-edged sword.

"He's gone in and played for Fulham against Norwich in their FA Cup replay and he was outstanding. I spoke to Rene, who was really impressed with him

"The Premier League is where Dan wants to be and that's where I knew he'd end up going. We've obviously been thanked by Fulham because we helped him with his development but it's not a good scenario for us."

Clark hopes that midfielder Mitch Hancox (ankle) and striker Lee Novak (hip) will recover from knocks to be fit for Saturday's home game against Yeovil.

But Bartley, midfielder Tom Adeyemi (back) and striker Peter Lovenkrands, who has had a scan on his injured groin, are all still out.