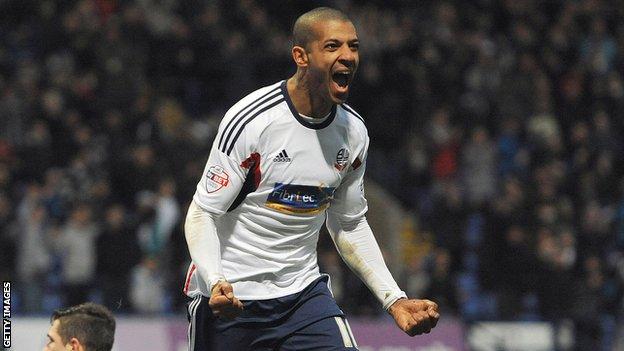 Bolton striker Jermaine Beckford is expected to be out of action for three weeks with a hamstring injury.

The 30-year-old was hurt in the first half of the 1-1 draw with Nottingham Forest last Saturday.

He will miss the weekend trip to Reading and the FA Cup fourth-round tie with Cardiff City on 25 January.

Beckford has scored eight goals in 25 appearances since joining Bolton from fellow Championship club Leicester City for an undisclosed fee in July.

Meanwhile, Bolton have been boosted by news that goalkeeper Adam Bogdan is back to full fitness after a knee problem that has kept him out since October.

But manager Dougie Freedman says he will find it difficult to displace Andy Lonergan, who has deputised for the past 14 matches.

"It's hard for everybody if they're not in the team," Freedman told BBC Radio Manchester. "I'm not suggesting we've hit a peak, but we're performing well.

"In that particular position, Andy has been sensational for us. I think he's been our best player over the past couple of months and there's no doubt he holds that position right now."