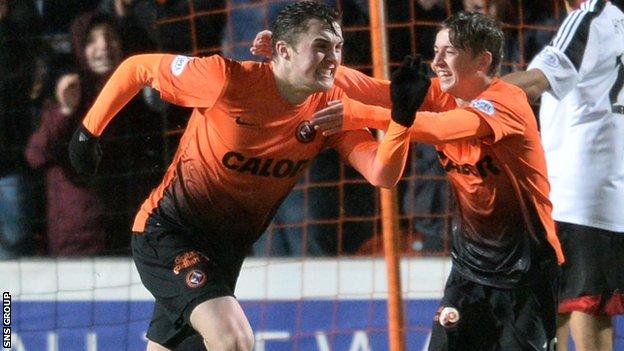 Dundee United teenagers Ryan Gauld and John Souttar have been given a winter break, which will see them miss Saturday's trip to Ross County.

Manager Jackie McNamara is allowing the duo, who have been the subject of intense transfer speculation, to take a holiday in the sun

"It will be good for them to recharge their batteries both physically and mentally," Thompson told BBC Scotland

"They are two young boys and they have hardly had a rest since being on international duty last year."

There has been a steady stream of scouts at Tannadice in recent months but Thompson added that United have received no offers this month for any of their players.

"This window is one where clubs are trying to sign players to win leagues or win promotion or avoid relegation," he said.

"Our young players are not those kind of signings at this stage. They are part of our long-term plan here. I don't want to sell anyone at this stage and I am under no pressure to do so."

McNamara, will be without injured striker Brian Graham for at least three weeks and there are doubts over Nadir Ciftci for Saturday's match in Dingwall.

With David Goodwillie having returned after his loan spell from Blackburn Rovers, United may try to add another striker to their squad.

Former defender Gary Kenneth is training with United and he has played in a couple of bounce games for the club in an effort to keep himself fit.

Kenneth is a free agent after leaving Bristol Rovers and has turned down offers to sign for Arbroath and Montrose.