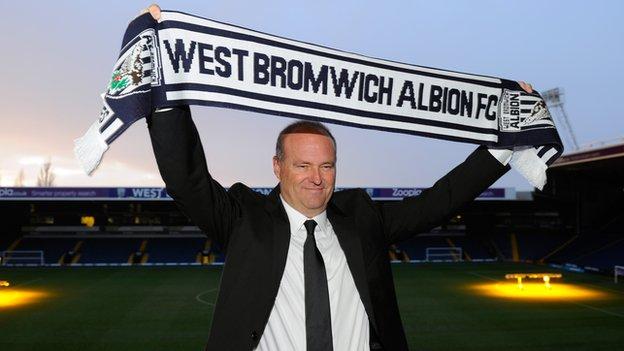 New West Brom head coach Pepe Mel wants to take the club into Europe for the first time since 1981.

Mel added that he wanted Albion to play a more possession-based style than they did under his predecessor Steve Clarke.

The 50-year-old, appointed on 9 January, leads a club who are 14th in the Premier League.

But asked as to where he thought he would be with Albion a year from now, Mel said: "Fighting for places that give access to the Europa League."

He added: "It would be great if WBA could go on and compete in Europe in the future."

West Brom - currently three points above the relegation zone - have qualified for Europe five times, the most recent of which was when they played in the 1981-82 Uefa Cup, losing to Grasshoppers Zurich in the first round.

Mel, who qualified for the Europa League as boss of his previous club Real Betis, has taken charge of a side who played a counter-attacking style under Clarke, sacked on 14 December.

Who is Pepe Mel?

"Mel has held a long-cherished wish to work in the Premier League, and he has been taking English lessons for several months in preparation for his much-desired move to Europe's most powerful domestic competition."

The new boss wants a change of emphasis, saying: "We'll be looking to get the ball back as soon as possible and then keeping it.

"In football, possession of the football is absolutely vital.

"You cannot go throughout 90 minutes of the game without having the ball, we need to get it back as quickly as possible.

"The most important thing is that they [the players] want to do it, that they need to be hungry to adapt to the style."

The Spaniard held talks with West Brom in December, but was initially ruled out after it became clear he wanted to bring his own backroom staff.

"West Brom are obviously keeping their existing team, the future will tell whether or not my assistants join us, but I'm extremely happy at the moment and everybody is working really well together," Mel added.

Mel was sacked by Real Betis in December after three years in charge which saw the Spanish club regain their place in La Liga before finishing seventh last season.

He added: "West Bromwich Albion are the club that showed the most interest in me from day one since I left the position at Betis.

"England is the best place to be, with the best coaches and players. It is also the birthplace of the game."

He also admitted that he would look to the Spanish league for potential transfers this summer.