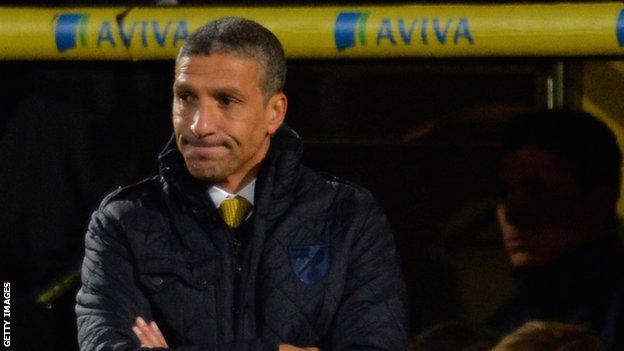 Norwich City boss Chris Hughton has said he will work to improve the club's position for supporters who have called for him to leave.

The Canaries are two points above the Premier League relegation zone after six games without a win and some fans want Hughton to be sacked.

"The supporters show the passions of their club. We have the same passions here," Hughton told BBC Radio Norfolk.

"And I am desperate as a manager to make sure we keep making progress."

Tuesday's 3-0 defeat at Fulham in an FA Cup third-round replay provoked an angry reaction from a section of the Norwich support, with a text vote on BBC Radio Norfolk on Wednesday ending with 516 votes for Hughton to go, and only 34 for him to stay.

The club's chief executive David McNally has defended Hughton, by saying the former Newcastle United and Birmingham manager is meeting his remit by keeping the side out of the drop zone.

It is an important week for the Canaries, with back-to-back home games against 10th-placed Hull on Saturday and then Newcastle on Tuesday.

Defeat by the Tigers at the weekend, if results went the wrong way, could put Norwich bottom of the Premier League, while a win could put them in mid-table.

"In a league this season that is very tight around us, we know we're only three points away from 10th place," said 55-year-old Hughton.

"But we want to fight and work as hard as we can to make sure we start looking upwards.

"But we certainly understand and respect the opinions of the supporters. It is their club and one thing I can guarantee is that we are working as hard as we can to be looking upwards."