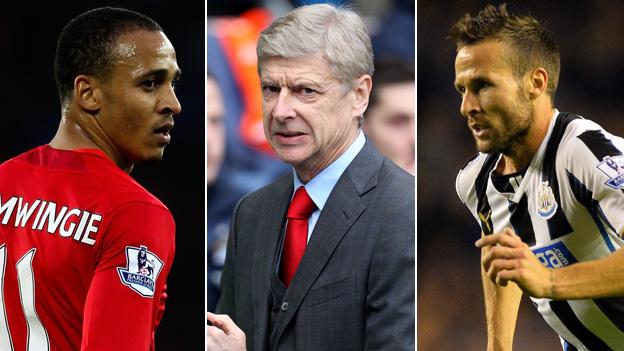 There is a man on my telly standing outside The Den in a suit speaking fast and portentously without full stops or commas and with lots of superlatives.

I'm scared because there is also a clock counting down in the bottom right-hand corner so something important must be about to happen like the arrival of the four horsemen of the Apocalypse but it turns out Shaun Batt has joined Leyton Orient from Millwall instead. On loan.

Welcome to Transfer Deadline Day, which I've deliberately written in capitals because there are those who think we should make it a public holiday.

Chaotic and stressful and full of panic buying, Transfer Deadline Day and the window that precedes it make up football's equivalent of the Yuletide season, with Sky Sports' Jim White playing its equivalent of Santa. "Sorry, no joy with Fabregas, I brought you Fellaini instead."

A magnificent irony of transfer windows is that they were introduced in 2002-03 in part to stabilise the game.

It's about ducking and diving, maybe finding a player whose mother-in-law lives in Taunton, 10 miles down the road from Yeovil. Which isn't on most sat-navs

Transfer windows were part of a compromise deal between football authorities and the European Commission, with the sport insisting on contractual stability for players, and clubs investing in those players, in exchange for freedom of movement at prescribed times of the year.

Yet there is nothing stable about transfer windows and the media coverage that attends them. Indeed, Transfer Deadline Days in Britain, which generate mind-boggling numbers for a wide range of media outlets, have come to resemble the NFL draft in the United States.

But here is another irony. The NFL draft is by some measures the second biggest sports story in the United States in any given year because it is the principal means of player acquisition and a genuine game-changer. With the weakest team getting first pick, it democratises the league, theoretically giving every team an equal chance on any given Sunday.

In contrast, Transfer Deadline Days involve an awful lot of acquisitions across an unlevel playing field that often change nothing, but still generate enough hot air to make it seem as if they might.

"Everybody has a little panic for the simple reason that the supporters demand a big name, or at least hope for one, and some of this is driven by the media. But for smaller clubs it's very difficult to get someone in that people can gasp at."

It is difficult to find a manager who is a fan of transfer windows, whether they manage in the Premier League or the lower reaches of the Football League.

Ian Holloway, who managed Blackpool and, briefly, Crystal Palace in the Premier League, reckons transfer windows are "utter madness" and lead to "the headlong hurtling into deals to rescue dreams".

"They encourage knee-jerk reactions, inflated transfer fees and wages and minimal planning and background checks," adds Holloway, who parted company with Palace in October and is now at Millwall.

Johnson, whose side sit second from bottom in the Championship table, spends his Januarys being assailed by hordes of agents hawking players he had never heard of. Like a tourist in an exotic flea market, he usually ends up with something he doesn't really know what to do with.

"You don't want to miss anyone," said Johnson. "So you look them up on the computer, find out what they can and can't do. But players with good character are unbelievably difficult to get."

Other managers of smaller clubs lucky enough to have coveted players on their books see transfer windows as tantamount to restraint of trade.

The Premier League's counter argument is that either you have contractual stability for players and the squad stability that brings, or you have players being sacked at the drop of a hat or leaving at the drop of a wallet, to borrow a phrase from former Arsenal vice-chairman David Dein.

However, Holloway believes the old system, whereby clubs were allowed to buy and sell players up until and including the third week in March, was a more stable one, in that it allowed clubs to formulate long-term strategies away from the media and fan frenzy that constitutes a transfer window.

Meanwhile, League Managers' Association chief executive Richard Bevan argues that so many managers are being sacked during the January transfer window and the weeks leading up to it because twitchy owners are unwilling to hand their money over to someone who is perceived to be failing.

In addition, Arsenal boss Arsene Wenger says the system causes unrest in the dressing room, in that an out-of-favour player might spend from November to the end of January agitating for a move, or going through the motions for fear of suffering an injury and scuppering a possible move, or worrying that they are about to be supplanted by a new signing and losing motivation as a result.

Wenger, however, has no compunction about causing unrest in rival teams' dressing rooms, having upset Newcastle boss Alan Pardew with a late bid for midfielder Yohan Cabaye last August.

The Premier League argues that a smart manager is one who is best able to deal with all these dressing room kerfuffles and play with the cards they were dealt at the start of the season.

Wenger's main complaint has always been with the January window in particular, which he believes distorts the competitive balance midway through a season. Why, asks Wenger, should a club be able to buy their way out of trouble at the expense of a poorer club which had their house in order before the season started?

Wenger's argument is moot for two reasons. First, the old system meant rich clubs were able to run riot with their cheque books for most of the season, not just in January. Second, the January window is effectively a sop to the European Commission and its directives on freedom of movement.

As it is, players' union Fifpro claims the current regulations impede players' freedom of movement and is preparing to challenge the system in the European courts.

And while some fans will be of the opinion that well-remunerated players don't deserve the same rights as the rest of us and should take their 50 grand a week and stop complaining, other fans will find it bizarre that footballers, many of them on modest salaries, have fewer rights than other workers.

Wenger does have a point in his criticism of the timing of the summer transfer window. As it stands, the window closes two weeks after the start of the season, meaning a player might play two or three games for one club before being poached by another.

"The first game of the season would be a good time to close it," says Redknapp. "Then we could all concentrate on the football."

Ten years of the transfer window

The present system was introduced ahead of the 2002-03 season, as part of a compromise with the European Commission.

There are two transfer windows each season.

The first one for English football commences on 1 July and usually ends at 23:00 BST on 31 August.

The second transfer window begins at midnight on 31 December and ends at 23:00 GMT on 31 January, or the first working day after that date.

Before the introduction of the transfer window, players could be traded throughout the season up until 31 March.

Each national football federation has its own registration period, so international transfers can take place if the window in the country of the buying club is still open.

Free agents can be signed at any time during the season as long as they had been released by their previous club before the end of the transfer window.

The difficulty of co-ordinating the transfer window in England with other European leagues is the principal reason why the summer window has not been moved forward.

But another reason is that the media and football fans, unlike Redknapp, do not want to concentrate solely on the football. They want to concentrate on Redknapp chatting with reporters about the transfer window through the window of his Range Rover.

When transfer windows were introduced, they were seen as potentially damaging for the red tops, for which transfer tittle-tattle was a staple. But the British media have adapted, turning transfer windows into feeding frenzies for football fans of a dramatic persuasion. Which is most of them.

Last January, disaffected (you read that word a lot in the football pages in January) West Bromwich Albion striker Peter Odemwingie was spotted outside Loftus Road on Transfer Deadline Day, caught in the act of trying to force through a move to QPR off his own bat.

The Odemwingie Fiasco, as it came to be known, had some of the ingredients of a caper movie: brinksmanship, silliness, adventure and audacity, as well as the comedy of embarrassment. And the British media milked it for all it was worth.

And it is in January, when few Premier League powerhouses do big business because of players' involvement in European competition and many trades in the Football League consist of low-key loans, that the British media really excels, making fans believe there is a mega signing lurking around every corner.

"All we're trying to do is nick players here and there," says Gary Johnson, exposing the unglamorous truth for the majority of Football League clubs.

"It's about ducking and diving, maybe finding a player whose mother-in-law lives in Taunton, 10 miles down the road from Yeovil. Which isn't on most sat-navs."

Who knows which players will find their way to Yeovil this Transfer Deadline Day. But if anyone does, it will be a case of ignore the football and feel the superlatives. And try to forget he's only there on loan.