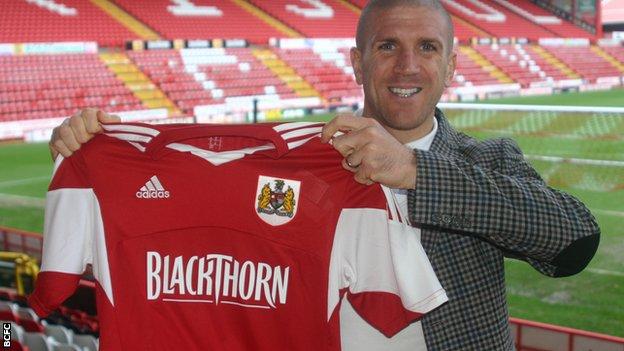 Defender Adam El-Abd is excited about making a new start at Bristol City after ending his 20-year association with Brighton & Hove Albion.

The 29-year-old made 342 first-team appearances for the Seagulls after coming through their youth ranks.

However, he has moved to Ashton Gate on a three-and-a-half year deal after being restricted to 11 games this term.

"I'm happy to draw a line underneath it and look forward to the challenge ahead," he told BBC Radio Bristol.

The El-Abd family have history in the West County with Adam's older brother Joe having played for Bristol Rugby before moving to Toulon and later Oyonnax, where he continues to play. Their younger brother Sami is an ex-Team Bath player.

"There is something about the West County that draws the El-Abds to it. Both had a successful time there and spoke highly of the city," Adam said.

"I sat and waited for my chance at Brighton, then I got it and for one reason or another it didn't quite work out for me down there. I had good times on the whole during my 20 years down there.

"Brighton has been my club since I was nine years old and I absolutely fulfilled a dream by playing at the Amex Stadium in front of 30,000 people every week.

El-Abd, capped seven times for Egypt, fell down the pecking order at Brighton under manager Oscar Garcia with Gordon Greer and Matthew Upson the regular starters in the centre of defence.

He had a run of six starts when captain Greer was injured against Leicester in December, in which time Brighton won five games, but made his last appearance for the club off the bench against Birmingham earlier this month.

And El-Abd said the League One club's offer of a lengthy contract and the ambition of Robins manager Steve Cotterill convinced him to make the move with 18 months remaining on his deal at the Amex Stadium.

"The contract shows huge commitment from the club to me and my family and it's something I look to repay with my performances on the pitch," said El-Abd.

"I'm joining the club while they are not in such a great spot, but I'm convinced with the guidance of the new gaffer we are going to achieve good things here.

"In three years' time I want us to be pushing for promotion to the Premier League. I haven't come here to sit around in League One."