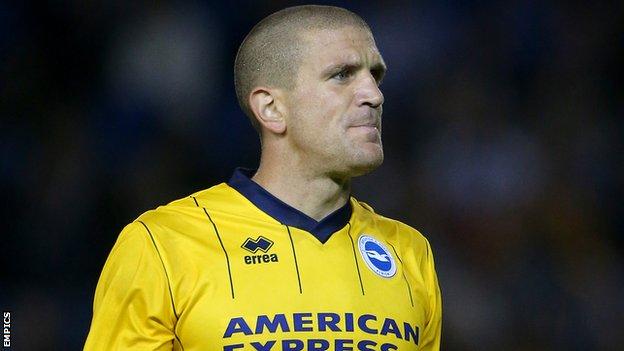 The 29-year-old centre-half, who has won seven international caps for Egypt, has agreed a three-and-a-half-year deal with the League One club.

El-Abd came through the youth ranks at Brighton, making a total of 342 appearances for the Seagulls.

"Adam is a tough cookie who brings a wealth of experience to the club," said Robins boss Steve Cotterill.

El-Abd, who made his first-team debut for Albion in November 2003, had 18 months remaining on his deal at the Amex Stadium.

However he had been restricted to just 11 first-team outings this season, with Gordon Greer and Matthew Upson the regular starters in the centre of defence.

"Any good back four needs someone like Adam," added Cotterill.

I'm sad to see him leave, but he is the type of player who wants to be playing - particularly at this stage of his career

"He's capable of playing football from the back and we're delighted to have him here to complement the good defenders already on our books.

"If he's half as popular here as he is at Brighton then that will be great, and I know he will be."

"Players of Adam's calibre in terms of loyalty to one club are a rare breed in the modern game," Bloom told the Brighton club website.

"He has given us many years of service having come through the youth set-up and has earned his place in our history books.

"He has risen with the club, helping us gain promotion to the Championship via the play-offs in 2004 and as champions in 2011, and he has risen to many challenges under a number of different managers.

"I'm sad to see him leave, but he is the type of player who wants to be playing - particularly at this stage of his career.

"He has given excellent service to the club and has been one of our most successful home-grown players. On behalf of all at the club, and all Albion fans, I would like to thank Adam for outstanding service and wish him the very best for the future."