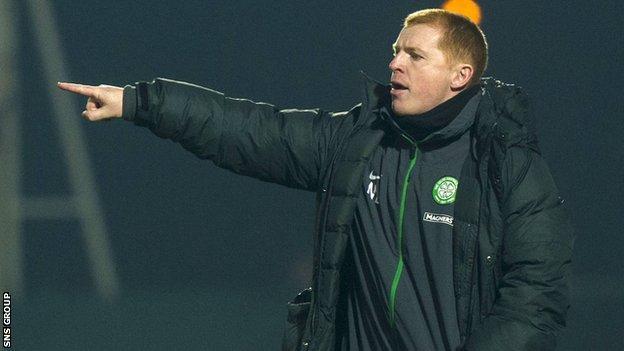 Celtic's Neil Lennon is the SPFL Premiership manager of the month for December.

The defending champions remain unbeaten in the league this season and won all six of their domestic games last month, without conceding a goal.

The one black spot was a 6-1 Champions League thumping in Barcelona.

"Obviously we came off the back of a heavy defeat and the character the players showed almost straight away was great," said Lennon.

"We've kept our clean sheet record intact and we're winning games and that's carried on into the New Year."

Celtic started January with a 1-0 win at home to Partick Thistle and followed that with a 4-0 triumph at St Mirren before taking a break from last weekend's fixtures to travel to Turkey.

"The players looked mentally and physically tired against Partick Thistle but there was a real zest about them again at St Mirren," added Lennon.

"The first half of the season has been very heavy and getting away will have done them the world of good."

Lennon made his first foray into the January transfer window this week with the capture of midfielder Stefan Johansen and hopes to do more business before the month is out, saying he was looking at "a number of positions".

The manager also said that Tom Rogic could return on loan to his native Australia, with Sydney FC one of two clubs interested in taking the midfielder.