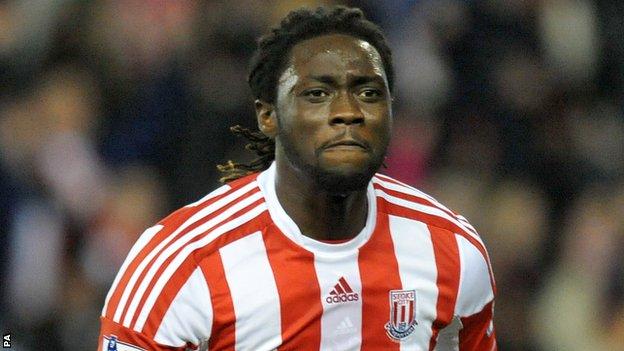 Stoke City's Kenwyne Jones will be left out for Saturday's game at Crystal Palace after refusing to play in last weekend's defeat against Liverpool.

Manager Mark Hughes confirmed reports that the striker, 29, sent a text message to him last Saturday night to say he was unavailable for selection.

"Maybe the events of last weekend are still in his mind," said Hughes.

"Sometimes you make mistakes and on this occasion Kenwyne made a mistake. I accept that sometimes that can happen."

The Trinidad and Tobago international has made seven league appearances without a goal this season, although he has scored five in cup competitions.

"I was disappointed and Kenwyne has been fined because it is not something that should happen," said Hughes.

The Stoke manager also refused to be drawn on rumours linking Jones with Everton.

Hughes said: "Maybe that's the problem - that maybe people are telling him there are clubs in for him.

"We've had no contact from anybody in this window, so maybe the information isn't what it seems from the outside.

"But we'll have to wait and see. The transfer window is open and a lot of things happen in a window."