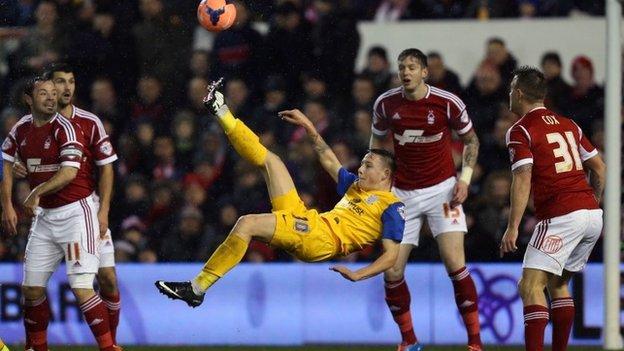 The Reds barely tested Declan Rudd after the North End goalkeeper made an early save from Simon Cox and the visitors had the better of the chances.

But neither side did enough to justify victory in a tame encounter played in teeming rain.

Fifth in the Championship against fourth in League One had promised plenty but the first half delivered very little.

Facing a team on an unbeaten 10-game run and with a home record of four wins from four, a trip to the City Ground looked a daunting prospect for North End.

Forest had scored 13 goals in their previous four games at the City Ground, including a 5-0 win over Premier League side West Ham and a 4-1 success against Blackburn Rovers.

But with only two defeats in their last 19 games, and having already disposed of Championship opposition in the previous round, the visitors had plenty of reason for optimism.

And despite a promising first few minutes Forest looked anything but a side who had smashed West Ham 5-0 in round three and had scored 13 goals in four games at home, only conceding twice.

They had plenty of possession but little penetration. Cox did have a good early attempt on goal well saved by Rudd and Jamie Mackie shot wide after a good move and fine pull-back by Gonzalo Jara.

In-form winger Jamie Paterson was Forest's main threat and screamed for a penalty after one jinking run saw him beat three men before tumbling in the box.

But the visitors looked disciplined and comfortable and centre-backs Tom Clarke and Bailey Wright were rarely troubled.

Preston did not muster a shot on target before the interval although Garner arguably had the best chance, hooking an effort off target from 12 yards against his former club.

Forest, most probably spurred on by a stern half-time team-talk by former Preston manager Billy Davies, began to play with greater purpose and tempo.

Preston North End have now lost just two games in their last 20. Those defeats came against two of the top three in League One, Brentford and Wolves.

But the promise once again faded and Preston looked just as likely to score. Garner blasted a decent shot over after a swift counter-attack and substitute Lee Holmes had a stinging shot pushed away by Darlow - one of three relatively comfortable late stops.

Paterson's pace and trickery remained the most likely source of a home goal, but they failed to test Rudd, much to the frustration of their increasingly animated boss Davies.

And North End, to the delight of their 2,000-plus noisy travelling supporters, looked the more likely winners in the closing stages and will no doubt fancy their chances in the replay.