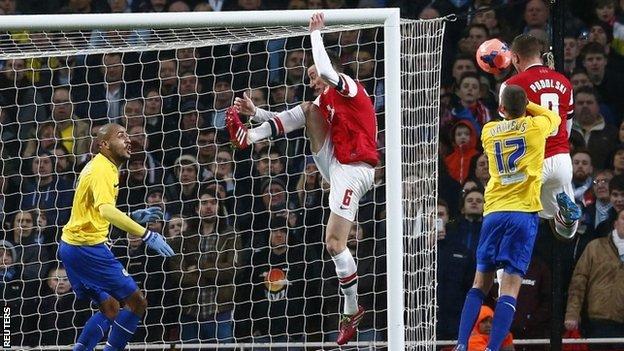 Arsenal eased into the FA Cup fifth round thanks to Lukas Podolski's two goals against Coventry City.

Mesut Ozil fed Podolski, who rounded keeper Joe Murphy to fire home, and the striker added a close-range header from Per Mertesacker's flick-on.

League One side Coventry rallied in the second half, with Leon Clarke hitting the post, but Olivier Giroud ended any doubt with a third from 12 yards out.

Santi Cazorla got a late fourth from a similar range.

Arsenal have not won a trophy since 2005 but remain in the hunt in three tournaments this season - the Premier League, Champions League and FA Cup.

They lead the league table by one point from free-scoring Manchester City, and face holders Bayern Munich in the last 16 of the Champions League.

Who is Gedion Zelalem?

Arsenal substitute Gedion Zelalem represents Germany at youth level although he is also eligible for Ethiopia.

The former Hertha Berlin youngster, who turns 17 on Sunday, was not born when Arsene Wenger became Arsenal manager in 1996.

So it may be that the FA Cup will be Arsene Wenger's best hope of ending that nine-year barren run and, perhaps with that in mind, he named a strong line-up.

Podolski, who wasted chances to score a hat-trick, made his second start since August following a hamstring injury, while Alex Oxlade-Chamberlain was starting for the first time since the opening day.

Coventry have had a trying season, playing their home games over 30 miles away in Northampton and starting the League One campaign on -10 points.

However, coach Steven Pressley has done an impressive job, leading them up to 11th in the table, and before the match he talked up their chances of winning and said they needed to be "aggressive in possession".

But for the first half of the game, they barely saw the ball.

Arsenal dominated from the start, with Jack Wilshere firing a shot wide within three minutes and Podolski and Oxlade-Chamberlain blazing over.

The Gunners opened the scoring when Ozil played a perfectly weighted ball to Podolski, who went around Murphy to fire home.

Coventry had only one chance in the first half but it was one of the moves of the game as Carl Baker ran 60 yards and hit a shot from outside the box which Lukasz Fabianski had to tip over.

Please use your phone

Nicklas Bendtner, returning earlier than expected following an ankle injury, had a disappointing night, including a couple of air-shots and several other missed chances.

But luckily for the Gunners, Podolski was in better form and put the hosts in total control with a close-range header.

Towards the end of the first half, some of the floodlights went out but both teams agreed to play on until half-time, when the problem was fixed.

After the break, Coventry were much improved and 18-goal top scorer Clarke wasted two golden chances.

The striker, who has put in a transfer request, was played through by Baker but his shot was saved by Fabianski. He then went even closer when his effort from the edge of the box hit the post.

Wenger blooded for the future when 16-year-old Gedion Zelalem replaced Oxlade-Chamberlain for the final 19 minutes but it was another two substitutes who added gloss to the scoreline.

Giroud got the third from Kieran Gibbs's cutback and Cazorla hit a bouncing shot into the net after Murphy had parried Carl Jenkinson's effort.

"Podolski can score goals. When you have a good chance you want him to have it because he is a clinical finisher.

"He has an unbelievable short and quick backlift and he is very accurate in his finishing.

"He can score goals when he starts, when he comes on he is always dangerous."

"I was exceptionally proud of that performance. I asked the players to be brave in possession and they truly were.

"Being 2-0 down at the Emirates it's easy to go under, but we got after them and forced them back and were the more likely team to score.

"In the end Arsenal's quality shone through, they tired us out in the last 10 minutes. In the end 4-0 was harsh. We left nothing out on the pitch."