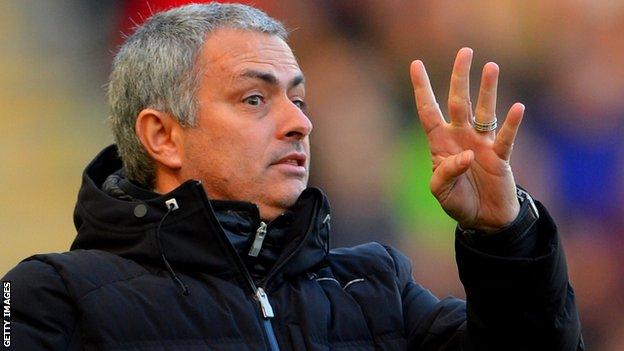 Chelsea boss Jose Mourinho says he will never walk away from Stamford Bridge, as long as the club want him to stay.

The Portuguese, 50, is in his second spell at the club - having left in 2007 after winning two Premier League titles, he returned in 2013 following spells at Inter Milan and Real Madrid.

"I stay until they want me not to stay," he told BBC Football Focus.

"No club moves me from Chelsea until Chelsea wants me to move because I want to be where I am loved."

Mourinho first arrived at Stamford Bridge in the summer of 2004, weeks after guiding Porto to Champions League success.

As well as two league titles, he also won the FA Cup and two League Cups but could not steer the Blues to European glory.

Mourinho claimed the Champions League for a second time at Inter, as well as securing two Serie A titles, before winning La Liga with Madrid.

But he says his long-term future is at Chelsea, as long as club owner Roman Abramovich is keen for him to stay beyond his four-year contract.

"I want to think about the contract I have now, which is a four-year contract - and I have three and a half years left," he said.

"I don't need a new contract. I don't need more money because I get enough and the club knows because I told them, 'I stay until you want', so when one day Mr Abramovich decides that I am not the man, he tells me and I go.

Mourinho's Chelsea are third in the Premier League, nine points ahead of Sunday's opponents Manchester United, who are seventh.

Champions United are 11 points adrift of leaders Arsenal and out of the FA Cup in manager David Moyes's first season after succeeding Sir Alex Ferguson.

But Mourinho has backed Moyes to deliver success to Old Trafford despite an indifferent start.

"He is not in trouble," the Chelsea manager said. "He is just going through a moment of frustration because results are not going their way.

"He is not under pressure of 'lose one match and lose your job'. He is stable, probably more stable than many of us in the Premier League.

"He will have time to rebuild his team, he will have a budget to buy players.

"He will succeed, he will win titles, so I don't feel for him because he has a fantastic job."

Mourinho said Chelsea are "not desperate" to win the title this season and "want to build a team for the future".

A run of four league wins in row has moved the Blues two points behind leaders Arsenal.

"We want stability and not to lose our winning DNA, so we are doing both things at the same time, but we will try to fight for the title until the end.

"This is a period in time I can build a very, very good team, not just me but the club, board and the owner."

And what of talk Mourinho could have replaced Ferguson at Old Trafford?

When asked if he thought about it before joining Chelsea, he said: "No. Because of Chelsea."