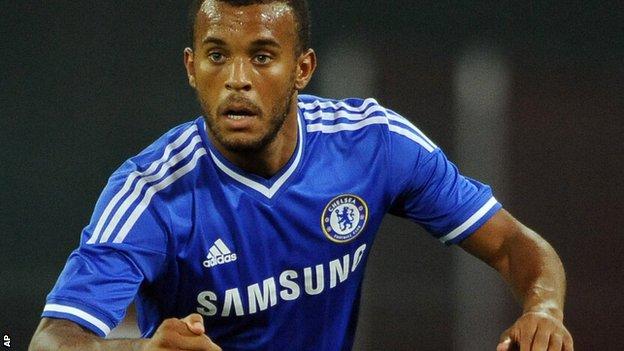 Aston Villa have signed Chelsea left-back Ryan Bertrand on loan for the rest of the season.

The 24-year-old has made only three starts for Jose Mourinho's side this season but played in the 2012 Champions League final win against Bayern Munich.

"Ryan brings a lot of big-game experience, so he'll be really good for us," said Villa manager Paul Lambert.

The England international becomes the 24th Chelsea player to be currently out on loan.

Bertrand made his Chelsea debut in April 2011, and had loan spells at Bournemouth, Oldham Athletic, Norwich City, Reading and Nottingham Forest earlier in his career.

The first of his two England caps was a substitute in a 2-1 friendly win over Italy in August 2012, shortly after he had played in all four of Team GB's matches at the London Olympics.

Bertrand made 38 appearances in all competitions for Chelsea in 2012-13, but has made only one Premier League start since Mourinho returned to manage the club for a second time last summer.

''He is a good player, he needs to play and he's happy with that," said the Chelsea manager.

Meanwhile, Villa have been told to pay Norwich an initial £450,000, potentially rising to £1.175m, for goalkeeper Jed Steer, 21, by the Professional Football Compensation Committee.

Norwich were entitled to compensation because Steer, who had come through the youth ranks at Carrow Road, was under 24 when he moved in the summer at the end of his contract.