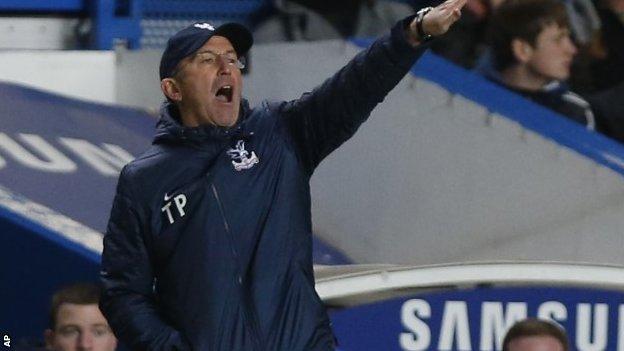 Crystal Palace boss Tony Pulis insists he will put his emotions aside when he faces former club Stoke on Saturday.

The 56-year-old left the Potters in the summer after 10 years in charge across two spells, before going on to replace Ian Holloway at Selhurst Park in November.

"It is always about the three points," he said.

"Those memories will stay with me, the area and the people I met, not just around the football club."

Pulis's previous spell at Stoke included winning promotion to the Premier League in 2007-08, reaching the FA Cup final for the first time, only to lose 1-0 to Manchester City in 2010-11, and qualifying for the knockout stages of the Europa League the following season.

He also established Stoke as a regular member of the Premier League, but after flirting with relegation before eventually finishing 13th last season, Pulis left in the summer.

Since taking over at Palace, their results have improved, but they have picked up just one point in their last three Premier League games and are now at the foot of the table, with Sunderland ahead on goal difference.

The Welshman has yet to bring in any new players, but that could change soon.

"We are looking at all areas and we need to strengthen in all areas," he said.

"We have got injuries we need to deal with, but I think we need to get players in to help us. We haven't done it yet but we certainly need to."