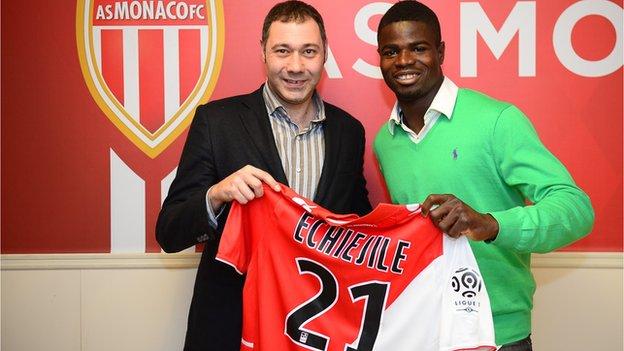 The 25-year-old left-back has signed a four-and-a-half-year deal, returning to France where he spent three years with Rennes from 2007.

"I am very happy and proud - Monaco is one of the best clubs in Europe," Echiejile told Monaco's website.

"They have a great reputation in Africa since George Weah played here."

As well as former Liberia striker Weah - three-time African Player of the Year and 1995 World Player of the Year - Echiejile pointed out the "great Nigerian players who have worn the Monaco jersey, like Lukman Haruna and Victor Ikpeba".

Echiejile played in the 2010 World Cup in South Africa, making two appearances for the Super Eagles

"I'll give the best of myself to succeed them as best as possible," he added.

The left-back, whose contract with Braga was due to end in June, played every match for Nigeria as they won the Africa Cup of Nations in South Africa last year.

Monaco's technical director Riccardo Pecini said: "He is a very good player that we followed for some time and we think he still has a great room for improvement

"He already knows the Ligue 1, an important aspect for us, and through sound recruitment, we continue to move forward in our desire to focus on players with high potential. "

Several Nigerians have played for Monaco in the past including Ikpeba, Haruna, Sani Keita and Rabiu Afolabi.

Ikpeba was the most successful, his 13 goals helped them to the French title in 1997 and that success saw him crowned African Footballer of the Year.