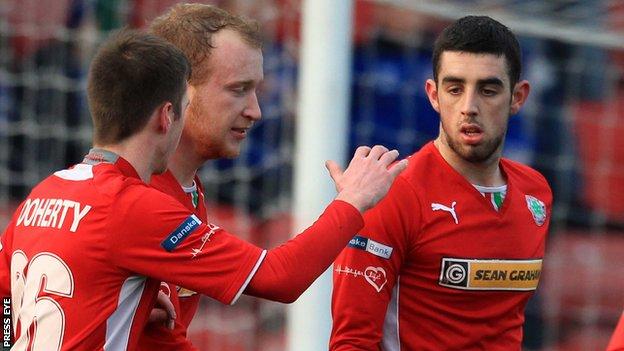 Cliftonville boss Tommy Breslin says his champions need to beat Portadown for the first time this season to keep the heat on league leaders Linfield.

Breslin's Reds closed to within one point of Linfield by beating Ards 3-2 away on Tuesday but the pacesetters have one game in hand.

"We have taken just one point from six against Portadown this season although we led in both games," said Breslin.

"But if we can be clinical in front of goal we will be in good shape."

Joe Gormley scored twice in the win over Ards to move on to 30 for the season and, along with strike partner Liam Boyce, is showing the form which brought Cliftonville their first Premiership crown for 15 years last April.

The north Belfast side are unbeaten in their last 15 league matches.

Breslin admitted he would have to rotate his squad because of the heavy schedule of big matches coming up.

Cliftonville are away to Coleraine in an Irish Cup replay on Tuesday night and then face Crusaders in the League Cup final four days later.

Linfield face a tricky trip to Ballymena United, who are having their best league campaign for years.

The game presents Ballymena new boy, defender Jim Ervin, with an early reunion with his former team-mates as he joined the Sky Blues from Linfield just a few weeks ago.

"Ballymena have been on a great run and now Glenn Ferguson has added to his squad, not just with Jim, but also Darren Boyce from Coleraine," said Linfield manager David Jeffrey.

"They are playing with confidence and in David Cushley they have a match winner on any given day."

Glenavon are expected to have new signing James McGrath in goals for their match away to Ballinamallard United.

McGrath, who had a spell with Ballinamallard, has been brought in by player-boss Gary Hamilton, who has first-choice Andy Coleman suspended and back-up keeper Jim Connolly out with a broken leg.

The Ferney Park clash is a meeting of two out-of-form sides as Glenavon and Ballinamallard have won just one of their last 10 in the Premiership.

Third-placed Crusaders need to take all three points from their trip to one-from-bottom Warrenpoint Town if they are to stay in touch with the top two.

Stephen Baxter's Crues, with just one league win from six, are five points behind second-placed Cliftonville.

Glentoran fans will be looking to new boy Curtis Allen to continue his fine start since joining the east Belfast club earlier this month.

Allen, released by Inverness Caledonian Thistle in December, scored two on his debut against Portadown last weekend and followed that up with the opener in Tuesday's 3-2 win at Glenavon.

On Saturday, the 25-year-old will be up against one of his former clubs, Coleraine, who recently ended their dismal run with back-to-back wins over Ards and Warrenpoint Town.

The kick-off time for the Ards v Dungannon Swifts match has been changed to 17:30 GMT as Clandeboye Park is staging a Championship One fixture between Bangor and Dundela at 14:00.

Coverage of the Irish Premiership is on Radio Ulster's Sportsound from 14:00 GMT