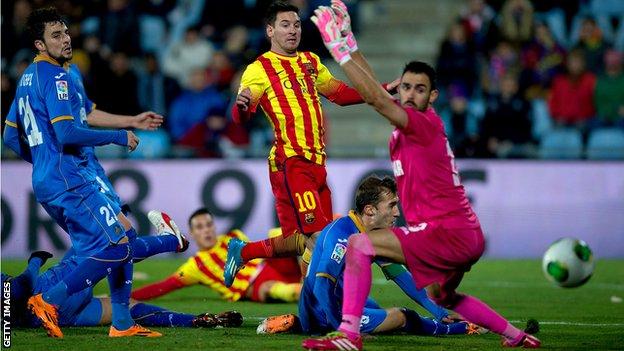 Lionel Messi marked his first start in two months with a brace as Barcelona eased into the Copa del Rey quarter-finals after a 2-0 win at Getafe.

Already leading 4-0 from the first leg, Barcelona went ahead just before half-time when Messi turned in Cristian Tello's cross at the near post.

The Argentine sealed the win with a superb individual goal after the break.

Messi continued his comeback from a hamstring injury by skipping past three Getafe defenders before slotting in.

The forward had made his return in the first leg last week, scoring twice after coming on as a 63rd-minute substitute.

The four-time Ballon d'Or winner suffered disappointment on Monday when he lost the world player of the year crown to Real Madrid's Cristiano Ronaldo.

Despite the comfortable win, it was not the perfect night for Barcelona as Brazil forward Neymar suffered an ankle sprain.

The £50m summer signing, who had to be carried from the pitch midway through the first-half, will undergo further tests on Friday in Barcelona.