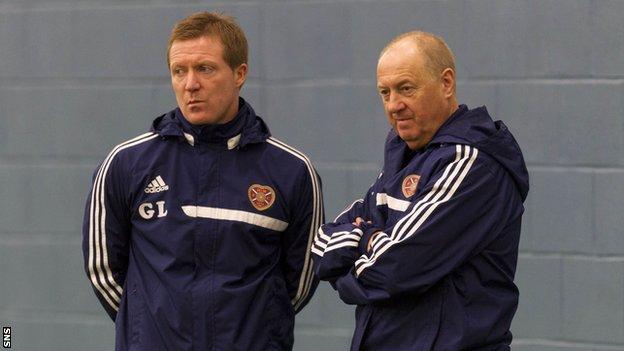 Brown, 63, will be in the dugout for the last time against St Johnstone on Saturday after administrators deciding against renewing his contract.

"It will certainly disrupt things a wee bit, but I don't really want to talk about it too much," said Locke.

"Obviously I'm really disappointed that Billy will be leaving. Whatever's happened, we have to put it behind us."

Brown returned without pay for his third spell as assistant after the club entered administration in June, signing a short-term deal in September.

Locke, who has a long association with Brown, having played under him and Jim Jefferies at Hearts, Bradford City and Kilmarnock, said the situation was far from ideal.

"Whatever's happened this week, we have to put behind us and we need to concentrate on trying to get three points tomorrow," said the Hearts boss.

Asked about how it would affect preparation to face St Johnstone, Locke said: "Obviously it's not been ideal, but we are all professionals and we have got to get ourselves focused for tomorrow.

"It's going to be a very difficult game against a team that are playing very well.

"I've learned lots of stuff (from Brown). He has been a massive influence on my career and I can't thank him enough for everything he has done for me."

Brown, who had a brief spell coaching at city rivals Hibernian, left the manager's post at East Fife at the end of last season.