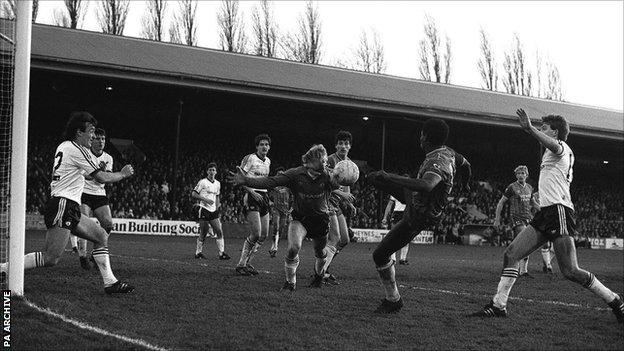 Free pizza for life, a £200 bonus and a holiday that never materialised.

A Google search of 'FA Cup upsets' throws up a consistent list of entries and a constant among them is Bournemouth's 2-0 third-round victory over Manchester United on 7 January 1984.

It was a result that sent shockwaves through football with then-Third Division Bournemouth, managed by a young Harry Redknapp, dumping the holders out of the competition.

Now, 30 years later to the month, Cherries fans will be hoping their side can repeat those heroics when they welcome Liverpool to a sold-out Dean Court in the fourth round of the competition on Saturday.

Milton Graham and Ian Thompson were Bournemouth's goalscorers that day, against a star-studded United side that included England captain Bryan Robson.

"It was just a dream to be playing against the best of the best," Graham told BBC Sport.

Thompson had only signed professional terms that season aged 25 and said he was "honoured" at the prospect of being on the same pitch as his heroes Robson and Ray Wilkins.

But, while Bournemouth's players were in awe of the challenge awaiting them, Redknapp's approach to the game was an expert lesson in man management and self-motivation.

"Harry wouldn't let us talk about it," explained Graham. "He tried to keep everything as normal as possible. We used to have a mad five-a-side - southerners against northerners - on the Friday, and that was exactly the same."

Thompson added: "The atmosphere in the town was incredible in the build up to it, there was great excitement.

"But I didn't notice a change in atmosphere in training. Harry kept our feet on the ground. He may not have believed we could beat them but he made us think we could and that was his great skill as a motivator."

In a break from their normal routine the Cherries stayed in the Roundhouse Hotel the night before and were treated to a meal at an Italian restaurant.

They also travelled to the game together in a team coach and such was the interest in the match their transport was delayed in getting to Dean Court as it struggled to get through the traffic and crowds.

Once at the ground Redknapp again came into his own as he fabricated a story about United's players watching horse racing prior to the game as well as reminding them of an interview United boss Ron Atkinson had given the night before.

You can always win a game, but will they? I don't think they've got enough to beat Liverpool. Then again, people said that about us

"Atkinson did an interview and it came across like this game was an exercise," said Graham.

"That was Harry's first team talk to us that day. He said: 'Did everyone see that interview last night?' It spurred us on.

"He said they are all in there, laying their bets, believing this is going to be a run out and they think they will beat us comfortably."

Thompson added: "Harry told us before we ran out: 'If you guys need to be motivated for a game like today then what are you doing in the game?'"

Bournemouth matched United for an hour, before five minutes of utter madness when first Graham and then Thompson gave them a 2-0 lead.

"I tell everyone it was 20 yards, but it was two yards really," said Graham, who now works as a production supervisor for a company that makes electrical fuses.

"It came in from a corner. Gary Bailey [United keeper] came to catch it and just flapped at it really and it landed perfectly for me and I volleyed it in.

"I tried to run off and celebrate but fell over and they all jumped on top of me."

Thompson's goal was toe-poked in from 14 yards and he admitted to "total disbelief" at seeing the ball hit the back of the net.

"I remember doing a ridiculous celebration in front of the fans and I think all of our players were shell-shocked," he added. "It was an out-of-body experience and one of those moments where you do something but don't realise until years later how important the goal was."

The final whistle eventually came despite United's fans attempting to prevent it via a pitch invasion and it was then the mayhem began. 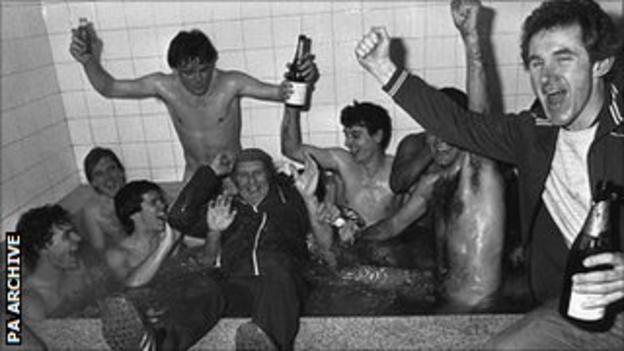 "After the whistle went, it was then we realised how important the result was," said Thompson.

"We had cameramen in from all over the place, there were people from newspapers, radio, TV and they were throwing microphones into our faces and we weren't expecting it, we just weren't used to it.

"We couldn't move and all of us were thrust in front of microphones asking for our opinions. It was then that I realised how significant and how big the result was in the football world."

Writing in his autobiography 'Always Managing', Redknapp said of the victory: "We raised our game, inspired by the occasion, and played better than we had done all season, and maybe United took us lightly."

Their reward was a £200 bonus and holiday that never materialised, while the night before goalkeeper Ian Leigh was promised free pizza at the restaurant they went to in Charminster before the game if he kept a clean sheet.

"'Nipper' Leigh never got his lifetime of pizza," Redknapp adds.

"A few years later the Italian restaurant changed hands and the new owner refused to honour the existing arrangement. The name of that miserable, skinflint proprietor? Harry Redknapp."

Thompson, who now teaches in Swansea, described the game as "the top moment in a pretty unremarkable football career", so what does he think about the chances of Bournemouth causing another FA Cup shock 30 years later?

"You can always win a game, but will they? I don't think they've got enough to beat Liverpool. Then again, people said that about us. I would love them to," concluded Graham.