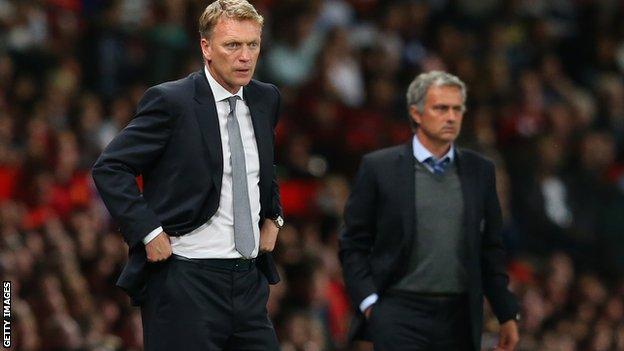 It was the challenge Manchester United had long feared. How do a club replace the greatest British manager of all time after 26-and-a-half years in charge?

Sir Alex Ferguson's departure in May was always going to usher in a period of transition.

But few expected it would be this difficult.

On Sunday, United take on Chelsea and their manager Jose Mourinho - the man many tipped to take over from Ferguson. Instead, it was David Moyes who got the job at Old Trafford. And Moyes is having a difficult first campaign.

Going into the game at Stamford Bridge, his side are 11 points behind the Premier League leaders Arsenal. Just as significantly, they are five points adrift of the fourth place spot which would bring Champions League football next season.

They have lost three of their last four games in all competitions, including two at Old Trafford.

The slump on the pitch has led to a slump for the club on the stock market. United's share price has fallen by 16% since Moyes was confirmed as their manager on 9 May. That has wiped almost £300m off the club's market value.

The most alarming drop has come in the last month as the team's form has dipped.

United's owners, the Glazer family, floated the club's shares in a highly-publicised market launch in August 2012. The money raised was used to pay down some of the considerable debts loaded on to the club following the Glazers' controversial £800m takeover in 2005.

While that has helped to halve annual interest payments to just over £20m, opponents of the American businessmen say they have stripped too much out of the club.

Some estimate that interest payments and debt financing costs amount to £400m. That money, so the argument goes, should have been spent on building a new squad to guarantee a seamless transition following Ferguson's retirement.

United seemed under-prepared for the post-Ferguson era, failing to land a marquee signing in the summer.

The departure of chief executive David Gill as Ferguson was leaving may have had a lot to do with that.

Yet the club are making more money than ever. Their global sponsorship and commercial strategy continues to bring record-breaking increases in revenue - the forecast for this financial year is £400m. In addition, the value of the new Premier League domestic television rights deals went up 70% on the last three-year deal.

In the next few weeks, the club are expected to announce a record-breaking shirt deal with Nike, which could be worth £300m over five years.

With overall debts down to just over £300m and interest payments also down, there is plenty of spare cash in the business.

And yet the share price in New York reflects concern from investors. Is this just a reaction to the form on the pitch? Or something deeper?

The investment banker Keith Harris, a lifelong United supporter who has worked on many Premier League takeovers, says that "the chickens are coming home to roost after years of financial mismanagement".

Speaking to senior figures at Old Trafford, there is no doubt there is frustration at the way the team has performed this season.

But there is also a resolute determination to stick to the plan and not to be bounced by short-term results on the pitch and the latest view from the trading floor.

A senior executive at the club told me today that while the ultimate aim of the business is to deliver value for shareholders, there is no alarm at the falling share price.

It was pointed out that only 10% of the club was floated on the New York Stock Exchange - allowing the Glazers to retain full control and meaning there are very few shares to trade.

Even the smallest of transactions therefore can lead to big fluctuations in the price. And while big figures in the markets like George Soros, the currency speculator, might be selling there are plenty of others ready to buy the stock.

Nevertheless there is no doubting the long term downward trend this season.

And that will probably only change once fortunes on the pitch improve and once the market sees evidence of the long term plan for rebuilding the team under Moyes this summer. A new deal for Wayne Rooney might also lead to a spike.

The senior executive said that the club was totally focused on securing top players before the start of next season and that a significant budget would be made available to Moyes.

Only after next season could people really begin to judge the new regime, he added.

But if they fail to qualify for next season's Champions League, it will be harder to attract the best talent. At best, it will mean they will have to pay a premium.

This year's budget is based on finishing third in the Premier League and reaching the quarter-finals of all cup competitions. That is already looking unlikely, although one season out of the top four will not cause any major problems. But two or three seasons out of Europe's top competition? Well that's a different matter altogether.

A more sustained slump for the reigning League champions may force United's army of sponsors to think twice about whether they are really worth all the money.

The anti-Glazer camp among United's support are hoping this is the start of a downward spiral that forces them to sell.

At this stage, it would be wrong to overstate the extent of the crisis at United. It is early days.

The example of Ferguson's rocky early years at Old Trafford is one often used by the club to try to calm jitters.

But that was in a period before English football in general - and Manchester United in particular - were so closely bound with stock markets, bond holders and foreign owners who care as much about the bottom line as they do the league table.

The Glazers say they are playing the long game. But just how long can they afford to go without winning trophies?