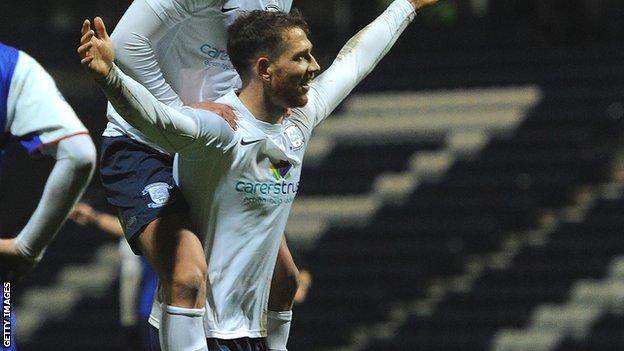 Defender Clarke was part of the Huddersfield side that went up from League One in 2012, with 40 goals from Jordan Rhodes pivotal to their success.

And Clarke says Garner, 25, is having a similar impact at Deepdale.

"It makes a massive difference. All of the top teams have got someone firing and Joe is doing that for us," the 26-year-old told BBC Radio Lancashire.

Joe Garner has scored 12 goals in his last 11 outings for Preston, having netted just once in his first 26 appearances for North End

"Hopefully he can be the man to get us promoted, just like Jordan did. If you go behind, you always felt he would get you the goals to get you back in front."

North End are fourth in League One, seven points behind second-placed Leyton Orient.

Former Carlisle and Nottingham Forest forward Garner failed to score for Preston last season after joining from Watford in January 2013.

But he has netted 12 times in his last 11 appearances, including a that saw Simon Grayson's side

After becoming the first Preston player in history to score three times in a match as a substitute, Garner is almost certain to return to the starting line-up for