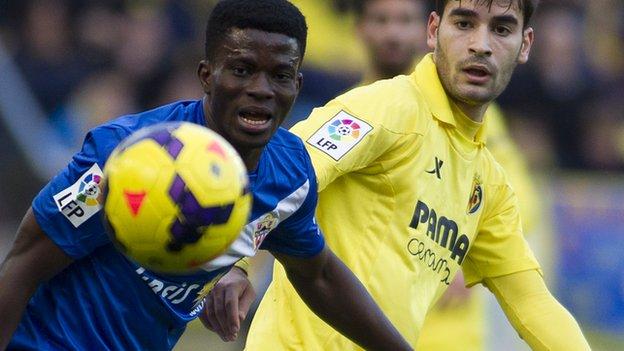 After representing Nigeria at youth level, midfielder Ramon Azeez is finally having a breakthrough season in the Spanish La Liga with Almeria.

Azeez played every match for Nigeria as they finished runners-up to Switzerland at the 2009 Fifa U-17 World Cup in Abuja where he was voted the third best player of the tournament.

And he captained the Under-20 side [the Flying Eagles] as they narrowly lost to France in the quarter-finals at the Fifa World Cup in Colombia three years ago.

When Azeez first arrived at Almeria in 2011, he was placed in the reserves to give him time to adapt to a new brand of football and environment.

Only four players from the 2009 Golden Eaglets are playing top-flight senior football. They are:

He was a stand-out performer for Almeria's B side in the past two seasons and his effort was rewarded with promotion to the first team last summer.

His debut came as a 74th-minute substitute in the La Liga fixture against Elche in August and subsequent appearances followed before he made his first start in the 3-0 defeat by Real Sociedad on 27 October.

The 21-year-old kept his place in the first-team and in December he scored the only goal in Almeria's away win at Real Betis.

"It has been a long and tough journey getting to this level," Azeez told BBC Sport.

"I got to Spain at such a young age and I realised the only way to survive was to be mentally strong and work extra hard.

"I'm happy with my progress this season, living my dream, but I know it's just like the start of a book and I still have a lot ahead of me."

Azeez is the kind of midfielder who appears to have it all - he can read a game, has an outstanding engine and he can also pick a pass - and his talent has so far earned him 11 starts and 4 substitute appearances in the Spanish top flight.

He credits Francisco Rodriguez, who was promoted from reserve team coach to first team coach, for aiding his development and allowing him to mature on and off the pitch.

"I must thank Francisco for the opportunity because I started under him in the reserves and he promoted me to the main team," said Azeez.

"I think that has helped me a lot. He told me from the beginning to do exactly what I've been doing under him and the sky will be the limit.

Ramon works hard for the team and has the ability to excite and make everyone play better.

"He's been saying the same thing, 'Azeez continue to work on your strength, have faith and I believe you can become a great player ', that's a motivational compliment that is pushing me to get better."

The slender-framed player has shown his versatility this term and insists he is happy to play wherever he is needed.

"I don't really care about a particular position in midfield. I'm just very comfortable to play anywhere," he said.

"This season I've played defensive, holding and attacking roles in midfield. It depends on the coach our tactics and opponent. "

While Azeez is enjoying a successful transition from youth to senior level - emulating the likes of Ogenyi Onazi and Kenneth Omeruo - he is aware of the challenges facing a young African abroad.

"People are always eager to list those who have been doing well from a group but it's never easy anywhere," he said.

"One mistake could push you away from your goal in life but the important thing is to remember why you are here and never stop working hard."

And Azeez is delighted to have older compatriots around him to give him support.

"Villarreal striker Ikechukwu Uche is a big brother who has never stopped encouraging me and continues to point me in the right directions," he said.

"And Chrisantus Macaulay [of UD Las Palmas in the Spanish second tier] is always a phone call away when we need to talk. I also get texts and messages on Facebook from folks back home after every game.

"These experienced players and my team-mates in Almeria have helped me a lot and pulled me along. Without them maybe I would have cracked a little."

After seizing his chance at club level, Azeez says he has not given up his dream of playing for Nigeria's senior team.

"It's a strong hope and desire to get a chance with the Super Eagles," he said. "A lot of people didn't expect me to be playing against the likes of Real Madrid and Barcelona now, so the World Cup in Brazil is not an impossible dream.

"I don't need anyone to remind me that I have to earn the right to fight for a place in that talented squad. There is simply no shortcut but only hard work and solid performances will alert the coach, nothing else."