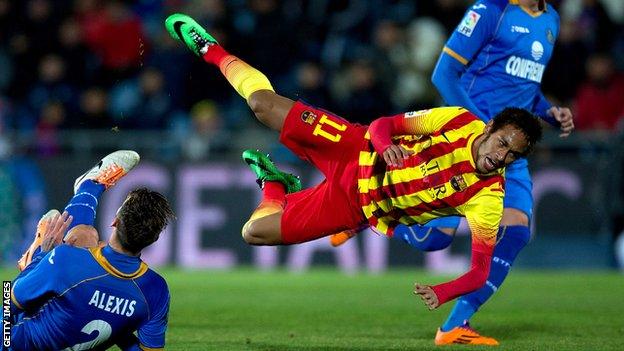 Barcelona forward Neymar will miss at least five matches after being ruled out for up to a month with a sprained right ankle.

The Brazilian, 21, had to be helped from the pitch in the first half of the Spanish champions' Copa del Rey win at Getafe on Thursday.

Unless he has a setback he should be back for the trip to Manchester City in the Champions League on 18 February.

"He is expected to be out of action for three to four weeks," the club added.

Neymar, who joined the Catalans in a £50m deal from Santos last summer, will miss Barcelona's next three league games against Levante, Malaga and Valencia.

He will also be unavailable for both legs of the Copa del Rey quarter-finals against Levante and could also miss the league trip to Sevilla.

Barcelona are currently top of La Liga on goal difference ahead of Atletico Madrid, with Real Madrid three points adrift in third.

They face City in the last-16 of the Champions League, with the second leg at the Nou Camp on 12 March.