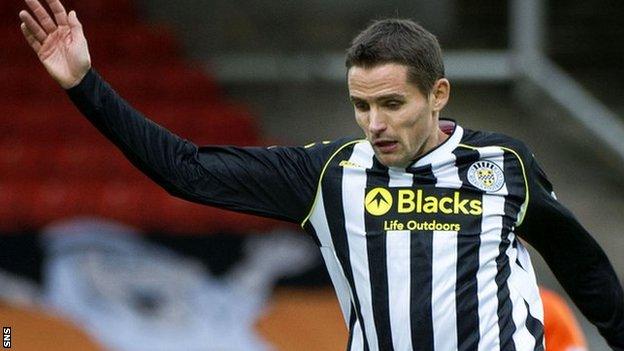 The ex-Aberdeen and Dundee United man has signed a deal until the end of the season and moves on a free transfer.

Manager Alan Archibald told the Thistle website: "Lee is a player that we tried to sign in the summer, but we couldn't agree a deal.

"So I'm delighted that we have managed to do so now."

Thistle have lost eight goals in their last two home games and Archibald has responded by moving for Mair, who has made only six appearances for the Buddies this season.

"He'll help add some experience at the back," said the Thistle boss. "It's not so much a case of those there not playing well, it's just that they lack a bit of experience and Lee will be able to help them out in that respect.

"He's a good player and is fit and raring to go and will be in the squad tomorrow."

Mair, who could make his debut against Kilmarnock, began his career with Dundee and, after loan spells with East Fife and Falkirk, joined Stockport County in 2004.

He returned to Scotland to join Dundee United after only six months with the English League One outfit before switching to Aberdeen in 2007.

Mair joined St Mirren in 2009 but was told by Danny Lennon in July that he could find a club.

However, he battled his way into the Paisley side's first-team squad two months later.

As Mair arrives, Thistle have loaned 19-year-old defender Darren Brownlie to Scottish Championship outfit Cowdenbeath until the end of the season.

Archibald, who last week signed midfielder Gary Fraser on a permanent deal from Bolton Wanderers after a spell on loan, had the previous day expressed his frustration at the January transfer market.

"We have room to bring a couple in, but it's hard to get the right one to come in and improve your squad, rather than just taking somebody for the sake of it," he said.

"We are actively trying but it's a very, very difficult market. Every time you go to a game, it's the same people you see and agents are offering everyone the same players."