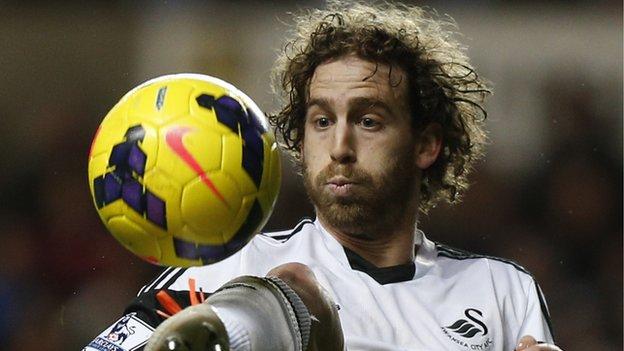 Swansea could bid for a new midfielder after Jose Canas joined Jonathan de Guzman on the club's injury list.

Canas (ankle) is out for a month, prompting boss Michael Laudrup to enquire about recalling Ki Sung-Yeung from his Sunderland loan.

But before Canas' injury.

"Things changed dramatically when we lost Jonathan de Guzman and Jose Canas in the space of a few days," said Laudrup.

"The injury to Canas will probably keep him out for about four weeks, and suddenly we only had two (fit) midfield players.

"Then I looked into the possibility of bringing Ki back, but the loan agreement said it should have been done by the end of December, so it's not a possibility.

"The only way we can change that is if Ki and both clubs all agree to end the loan, but of course Sunderland are not going to do that."

But in addition to Canas and de Guzman they are without Pablo Hernandez, Nathan Dyer, Michu and goalkeeper Michel Vorm.

Laudrup has already alluded to four "tie-break" encounters that follow Spurs' visit to the Liberty Stadium.

Ahead of Sunday's clash he reiterated that message as they sat three points above the relegation zone.

"It is so tight from our point of view and it depends on what we do in the next seven league games," said the Dane.

"In the next month and a half, from the game on Sunday until the Crystal Palace game (in March), we have four games at home and lots of games against opponents who are also in the bottom half of the table.

"This next month and a half is crucial to the rest of the season.

"If we come out of it well, things will be looking very good, if not we will have to admit we will be in a relegation battle for the rest of the season."