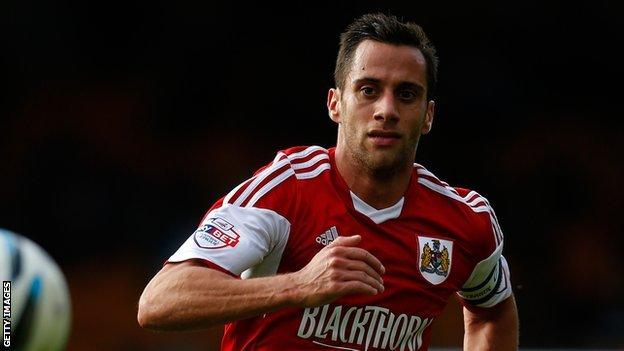 Ahead of the teams' meeting on Saturday, MK Dons boss Karl Robinson has said he tried to bring Bristol City striker Sam Baldock back to the club.

The 24-year-old left the Dons for West Ham in 2011 and has spent the past two seasons with City.

Robinson told BBC Three Counties Radio he enquired about a loan for the forward earlier this season.

"I made a phone call to his agent to try and see if he could come back, come on loan," he said.

"But he's very happy at Bristol and he's scoring goals and is a constant threat for them.

"He's a great footballer. I'd love to have him back."

Baldock was held in high regard at Stadium MK, having been born a little more than 10 miles away in Buckingham and come through the club's youth programme.

He scored 43 goals in 124 games for MK before departing for the Hammers, where injury restricted his influence.

His debut season for Bristol City last term was hampered by a calf injury, but he still managed to net 10 times as the Ashton Gate side were relegated to League One.

And Baldock, whose brother George still plays for MK, has been on target 12 times already this season - in August - despite City's plight at the bottom of the table.

"He knows what I think of him and how talented I think he is," said Robinson. "We have the utmost respect for Sam and we have to be conscious of him for 90 minutes on Saturday."