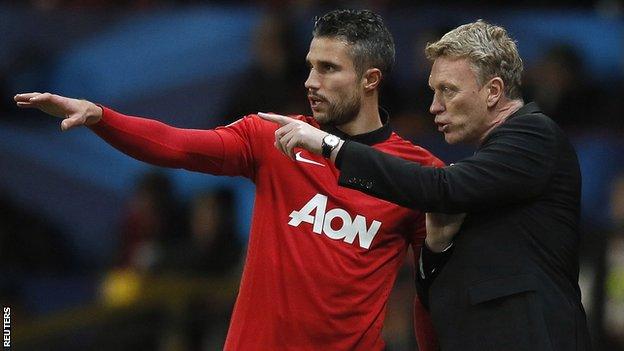 Reports had suggested that the £24m signing was unsettled at the club following the departure of Sir Alex Ferguson at the end of last season.

Robin van Persie and Wayne Rooney have featured just eight times together this season for Manchester United. They have won six of those games and drawn the other two.

"It couldn't be further from the truth," Moyes said about the claims.

Ferguson wrote in his autobiography that he apologised to Van Persie as he had told him he was not retiring soon when he signed from Arsenal in 2012.

Speculation had increased that the Netherlands striker was no longer happy at Old Trafford as United slipped off the pace in the title race.

"I keep saying it is untrue but for some reason people don't want to write it or hear it," said Moyes.

"But it is the fact. Most people know that I talk pretty straight.

"If there was something wrong I would be the first one to come out and say it.

"I have a really good relationship with Robin, as I do with all the players.

"But when you are not winning, people look for reasons, and probably think I am not getting on with Robin."

Moyes, in his first season in charge, has guided United to the last 16 of the Champions League as well as the League Cup semi-finals.

But the champions are 11 points off leaders Arsenal heading into this weekend's fixtures in the Premier League and they are out of the FA Cup following a third-round defeat by Swansea.

They face Chelsea on Sunday and could be 14 points behind the Gunners by the time they kick off as Arsene Wenger's side play Fulham on Saturday.

Van Persie and Wayne Rooney are set to miss the clash at Stamford Bridge as they continue to recover from thigh and groin problems respectively.

The Dutchman has not featured since coming on as a substitute in the 1-0 win over Shakhtar Donetsk in the Champions League on 10 December.