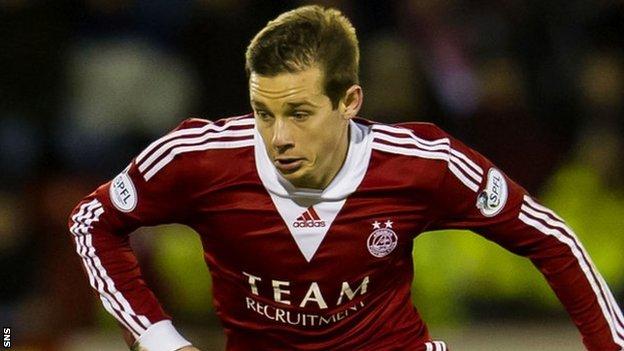 "I have known Peter for years and all he has needed is a good run of games and bit of confidence and it has paid dividends," said Considine.

"Every team that we play against tried to boot him off the park."

Considine likened Pawlett to Ryan Fraser, whose good form for Aberdeen led to a move to Bournemouth.

"He kind of reminds me how wee Ryan Fraser was when he was here," said the 26-year-old, who also praised fellow defenders Russell Anderson and Mark Reynolds.

"Folk would just try and kick him all the time.

"But, with the likes of Russell playing every week, he has been a massive player for us.

"He is so consistent, he has been playing some fantastic football and Mark Reynolds has been brilliant as well."

Considine is back in contention for a place in Derek McInnes' side for the after recovering from a calf injury.

However, he realises the good form of the current incumbents, as well as midfielders Ryan Jack, Barry Robson and Willo Flood, during a run of eight wins in their last nine games.

"It is down to the great balance and experience and the young boys coming on a bit more in the last couple of years," said Considine.

"The likes of Pete and Jacko have made a massive difference and the likes of Barry and Willo coming in has really got the boys playing some cracking football."

"Jamie Langfield has been outstanding this season and he should be in the Scotland squad," he added.