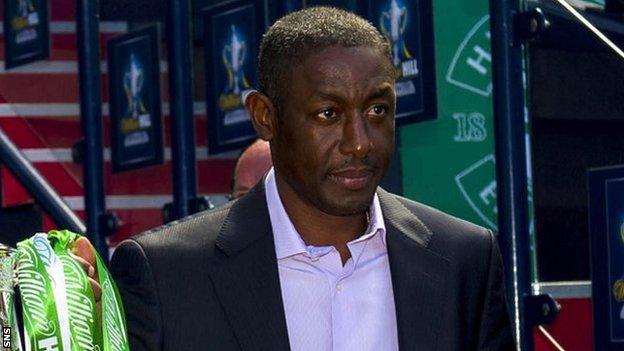 The 45-year-old former Trinidad and Tobago head coach will team up again with Hughes after leaving his coaching post with Portuguese club Boavista.

"Hopefully he will be here with us at the beginning of next week," said Hughes. "He was cleared by Boavista.

"He spoke to them and got their best wishes."

Unfortunately for us, he had a little bit of court business to do with the Trinidad FA

Latapy, who also played for Porto, Dundee United and Rangers, was part of Hughes' side when he was in charge at Falkirk, where he also worked as a coaching assistant.

Having played 79 times for his country, Latapy became national manager for two years until 2011.

"Unfortunately for us, he had a little bit of court business to do with the Trinidad FA for his time as Trinidad national manager and he had to appear in court," said Hughes ahead of his side's

"He is in Trinidad tying that up and, if he is not here on Saturday, hopefully he is here next week."