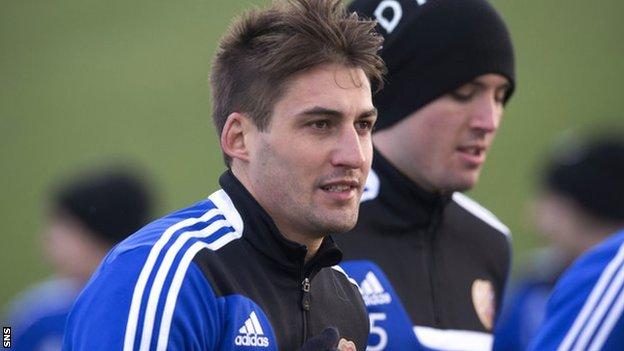 Skacel has been training with Hearts, while King has been the subject an approach from Swansea City while Stevenson has been linked with Cluj.

"Rudi's training with us at the moment," said Locke. "He's a player I obviously like a lot, but we can't sign players so there is nothing we can do."

Locke does not want to lose Stevenson.

"Ryan Stevenson I think is a fantastic footballer and I like him as a person as well," said the Hearts manager.

"If we can get good news this January and we want to rebuild, he's not a player I want to lose."

Skacel, the 34-year-old former Czech Republic international who has had two spells with Hearts, is a free agent after leaving Slavia Prague.

Obviously I would like to bring a few experienced players in, but it's not as easy as that

He has also been training with Alloa Athletic and manager Paul Hartley was but the former Southampton and Dundee United player would be attracted to a return to Tynecastle.

Managing director David Southern and director of football John Murray this week while negotiations continue in Lithuania to bring the club out of administration.

And the club stated cost cutting as a reason for

Meanwhile, Hearts have been told there will be while they are in administration but that they can apply for permission to bring players in to replace any that leave.

"I read all the stuff that's said about one out, one in, but I think it's important to get the message to our fans that it's not as straightforward as that," stressed Locke.

"You can maybe get a player out, but in terms of a player coming in, that goes to a panel and they have to agree with that.

"Obviously I would like to bring a few experienced players in, but it's not as easy as that.

"It's very difficult as well, because if you want to bring a player in, you have to tell them all the circumstances.

"Adam has done fantastically well and there has been a bit of interest from Swansea, but that's as far as that has gone at the moment."