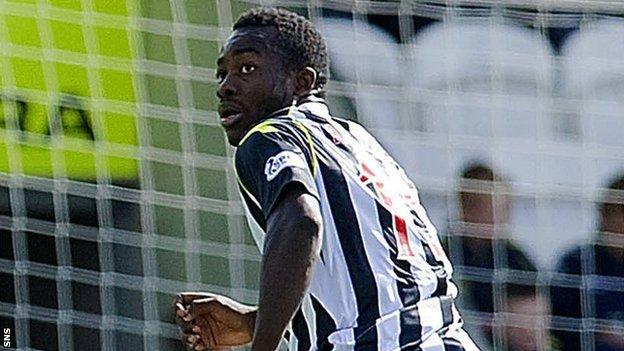 St Mirren manager Danny Lennon has given striker Stephane Bahoken a second chance after he failed to shine in his first six months on loan from Nice.

The 21-year-old had returned to his parent club, who wanted to farm him out to Ligue 1 rivals Bastia.

But that fell foul of international rules and he is back in Paisley.

"He has come back with a great desire and hunger to do better and I respect that," said Lennon. "I will never bite my nose off to spite my face."

Bahoken had played only four times and had not made a single appearance since September until coming on as a substitute in last week's 2-0 defeat away to St johnstone.

The Frenchman had failed to impress Lennon, but having already played for Nice's reserves as well as the Buddies this term, the move to Bastia fell foul of Fifa laws preventing players from featuring for three sides in one season.

That meant he was sent back to Scotland and Lennon said: "It was a big culture shock for Stephane when he first came here.

"But he went home and took a roasting from his club, his father and from ourselves."

The 22-year-old former Rangers winger was freed by the Dons on Wednesday just hours before agreeing a move to Paisley.

"Derek's comments don't worry me, not at all," he said. "I appreciate Derek's honesty and I'm sure Gregg will do so too.

"Gregg will be frustrated by the lack of playing time he had up there, but he has made it clear where he wants to go.

"Now he has to go out and prove he still has the talents that made him his mark at Rangers.

"He was a whirlwind, the new kid on the block, but if you look at his stats, he has only made about 50-odd appearances in the last five years.

"So he now has to build up his CV again."

Wylde had left Rangers for Bolton Wanderers but failed to make a single appearance and instead was sent on loan to Bury before his move to Aberdeen.

"He went down to England at such a young age and you see it so often with young Scottish talent going down there - it can harm you if you are not ready for it," added Lennon.

"But Gregg hasn't come here for the money, that's for sure. He's here to play football and we will certainly give him a platform to show the ability that he has got."