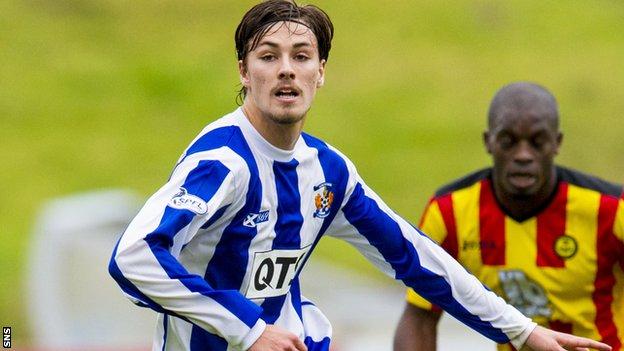 Jackson Irvine is keen to continue his personal development at Kilmarnock after recovering from a tough introduction to Scottish football.

The Celtic player extended his loan from Celtic until the end of the season after a baptism of fire at Rugby Park.

His defensive error against Motherwell in August cost Killie the game, but he soon learned from the experience.

"I wanted to stay and keep trying to play every week and keep growing as a player," said Irvine.

You deal with criticism, not just from the press but the fans, and getting in tough situations like making mistakes

The Australia Under-20 international arrived in Glasgow in 2010 from Frankston Pines in his homeland, but made only one first-team appearance, coming on as a substitute last September against Hibernian.

Despite his gaffe for Killie against Motherwell, the central midfielder is keen to progress his experience at Rugby Park and insists he is constantly learning about the pace of Scottish football.

"In terms of playing games, there's lots of things you learn," said Jackson.

"You deal with criticism, not just from the press but the fans, and getting in tough situations like making mistakes.

"Obviously I had my blunder against Motherwell at the start of the season. If I did that in an under-20s game it would have gone unnoticed, but when you make a mistake here you get punished for it.

"You don't want to disappoint the fans and the team-mates. It's a different level of pressure and that's just as important as the technical side of the game, learning to deal with that on the park."

Irvine forced himself to watch the mistake against Motherwell on television but has not spent any time dwelling on it, preferring to use it as a learning experience to improve his game.

"I didn't want to see it again but you have to pinpoint what went wrong," he said. "At the same time, everyone makes mistakes, from the top to junior football.

"But the scrutiny at this level is a lot harsher. I've had to deal with it pretty early in my career and that's a good thing.

"Luckily enough I haven't had anything like that again. The experienced players told me not to dwell on it because you will be nervous. That's how you learn - put it out your mind."