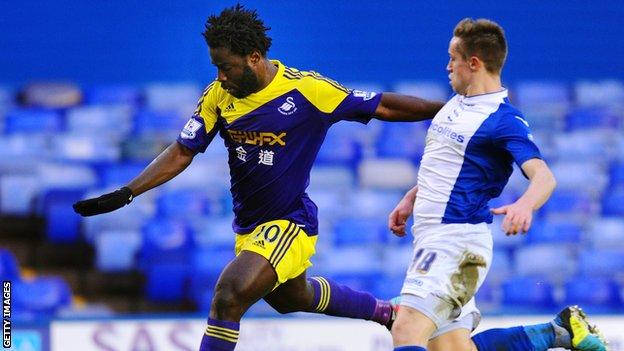 The Championship side, who knocked the Swans out of the League Cup in September, took an early lead when Lee Novak rose to head Paul Caddis' cross past Gerhard Tremmel and into the net.

The Ivorian then chipped Blues keeper Colin Doyle to send the Swans through.

Both sides went into the match in poor form with their only wins of 2014 coming in this competition.

Birmingham, who are 17th in the Championship, knocked out League Two Bristol Rovers to set up the tie with Swansea, who had disposed of Manchester United in the last round.

That famous win at Old Trafford for the Swans is their only victory this year and they are just three points above the relegation zone in 15th.

They now face a run of four league matches against other struggling teams, including Welsh rivals Cardiff.

Reports of training ground rows at the club have also surfaced, forcing players this week to deny there is a rift in the squad.

Laudrup has stressed that the Premier League is a priority for the Swans and made five changes for the trip to St Andrew's leaving out top-scorer Bony.

Swansea lacked invention going forward in the opening 45 minutes and struggled to get their passing game going on a wet and heavy pitch.

A shock looked likely and moments later, Swansea captain Ashley Williams had to clear off the line from Novak after goalkeeper Tremmel spilled the ball.

Jordi Amat missed Swansea's best chance of the half, shooting the ball over the from just five yards out.

But when Laudrup sent on Bony the Swans started to build some pressure and the striker's double in two minutes turned the tie around.

The hosts attempted to fight back with Swansea's Leon Britton forced to clear a shot off the line following Tom Adeyemi's surging run and shot.

But the Swans held on to reach the fifth round of the competition for the first time in five years.

"Bony is in very good form at the highest level, I watched him over the last few games and he looked very in-form.

"You know you have that to contend with if you get in front.

"His first goal was very good but the second goal we could have done more to prevent.

"You always need that second goal against a Premier League team especially with their fire power, we had chances, but we weren't able to take them."

"He [Bony] scored the two goals so you can say he turned the game for us, but I think the reaction from the team second half is very important.

"In our situation you want to have a win.

"A lot of players first half played much too tense and if you play and you are too tense it is very difficult to play.

"Second half we came out much more relaxed and we saw a bit more of what we are capable of."