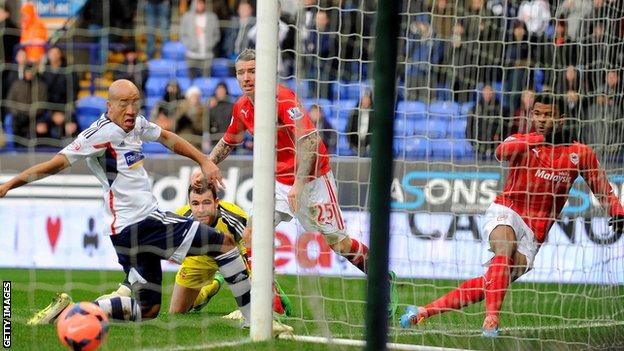 Substitute Fraizer Campbell sent Cardiff into the fifth round of the FA Cup with a win at Championship side Bolton.

Campbell had only been on the pitch five minutes when he finished from close range after an error from home goalkeeper Andy Lonergan.

Bolton's best chance fell to Medo, but his shot was saved by David Marshall.

The hosts could not find an equaliser and Ole Gunnar Solskjaer's side held on.

It means Cardiff, bottom of the Premier League, have reached the last 16 of the competition for only the third time in 20 seasons.

Cardiff are the only non-English team to win the FA Cup. Their only success came in 1926-27 and on the way to the final they won 2-0 at Bolton in the fifth round

But it was a deserved victory for the visitors as Solskjaer, who won the FA Cup twice as a player with Manchester United, claimed his second win since becoming manager earlier this month.

It had been a disappointing first half with both sides struggling to create chances.

Cardiff striker Andreas Cornelius, starting instead of Campbell, saw a deflected shot pushed over by Lonergan and Mark Hudson wasted a glorious opportunity when he misjudged a close-range header from Peter Whittingham's corner.

Bolton had been beaten 7-1 in their last match at Reading, a result and performance that manager Dougie Freedman described as "causing a sense of shame" around the club.

However, his side, 18th in the Championship, looked far more organised in defence here and nearly took the lead in first-half injury time, but Lee Chung-Yong dragged a shot wide of the far post.

Campbell and Noone had scored both goals for Solskjaer as his new charges beat Newcastle 2-1 in the third round and the pair, both brought on at the start of the second half, combined to put the visitors ahead.

Noone's soft cross into the penalty area was fumbled by Lonergan and Campbell reacted quickest to tap home from close range for his fourth goal in six games.

Lonergan was nearly at fault again a few minutes later when he misjudged a corner, but Campbell headed over.

However, the Premier League side had their own goalkeeper to thank for keeping them ahead when Marshall saved Medo's powerful effort.

The Cardiff number one also kept out a sliced clearance from team-mate Ben Turner as Bolton suffered a sixth defeat in their past 12 matches.

"David Ngog is having talks at Swansea.

"In the first half we had three or four half chances and at that level you have to take them. They brought two quality players on in Fraizer Campbell and Craig Noone and we made an error.

"Andy Lonergan is experienced enough, but he has been really good for us. It isn't a blame culture at this club and when we got around their box we didn't have that quality you need in front of goal.

"We huffed and puffed in the second half but I'm pleased with the spirit and the performance of the players."

"There is potential to do a deal with Peter Odemwingie going to Stoke and Kenwyne Jones coming to us.

"I can't confirm anything until deals are done and medicals are done but we are a long way down that road. I can't say anything else about any other players."