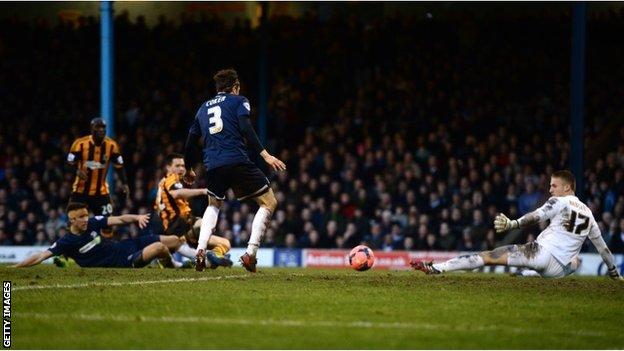 The Shrimpers, who are managed by ex-Tigers boss Phil Brown, had chances to score, with Michael Timlin hitting the bar from 35 yards.

But David Meyler played in Fryatt, who beat two Southend defenders to fire home in the 63rd minute.

And in injury time the striker cut in to beat keeper Daniel Bentley and seal the win.

Phil Brown led Hull into the top flight for the first time in their history back in 2008 and kept them up in their first season. He lost his job the following year and they went on to be relegated.

Hull boss Steve Bruce did not field a full-strength team against Brown's promotion chasers although it was still enough to see his Premier League side through.

With record signings Nikica Jelavic and Shane Long ineligible, Fryatt came into the starting line-up and took his chance.

Heavy rain made the pitch difficult work for both sides and Southend almost matched their opponents for the first half.

Steve Harper produced a fine save from close range to deny Barry Corr's header before Danny Graham missed a simple chance for the visitors.

Timlin had Southend's biggest chance early in the second half when his shot came back off the crossbar and Corr headed the rebound straight at Harper.

Fryatt then made them pay when he drove home a low opener into the bottom-right corner.

With the hosts not looking like forcing a replay, Fryatt ended any doubt late on when he beat Bentley at his near post.

"I am proud of them, but just disappointed that in the final third was a difference between the two teams, which is where Hull showed a lot of quality.

"We just did not have that belief and that comes from the exposure to Premier League football and the depth they have.

"With a bit of luck, we could have caused a bit of an upset, and the first goal was so important, their keeper made a vital save in the first half, then we hit the bar and soon after, we are behind."

"I would not expect a team of mine to roll over just because we are coming here in the cup, so they showed the right desire and attitude.

"The pitch was difficult, and towards the end it was awful conditions, a typical cup tie, sometimes in football you have to roll up your sleeves and we did that in abundance today to get through.

"Somebody like Matty Fryatt, if I don't give him an opportunity to play, then they are knocking down the door. He had come back into the side today and reminded me what a good player he is."