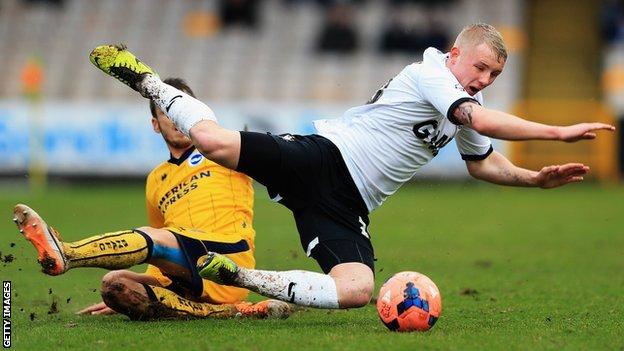 Championship side Brighton eased into the fifth round of the FA Cup for the third time in four seasons with a professional victory over League One promotion-hopefuls Port Vale.

Rohan Ince's hooked finish put the visitors ahead but Chris Robertson headed in from six yards to level.

And Jonathan Obika ran through to round goalkeeper Chris Neal and seal the win with 12 minutes remaining.

The victory was thoroughly deserved, despite the Seagulls opting to field a much-changed side in rainy conditions that seemed ideal for a Cup shock.

Brighton and Port Vale both have identical records in their respective divisions, having played 26 games and accumulated 39 points

March's lucky strike seemed to end the home side's hopes and Brighton were barely troubled after the interval.

The visitors started strongly with Lewis Dunk shooting narrowly wide after a purposeful run and March testing Neal with a fierce strike.

Brighton were dominating possession and deservedly took the lead in the 27th minute when Ince coolly shot home when a clever corner routine allowed him to find space in the box.

Vale responded after 11-goal striker Tom Pope narrowly missed out on getting on the end of a teasing cross as Robertson headed in from close range.

There was still time for the Seagulls to regain the lead before the interval and, although it was arguably deserved, they got lucky with the equaliser.

March tried to send in a cross but miscued his attempted centre and the ball floated into the top corner.

Brighton had several chances to make the game safe after the half-time break.

March tested Neal with a decent strike seconds into the second half and the home keeper then made a superb save from Jake Caskey's dipping long-range effort.

Neal also made a brilliant diving stop to deny Kemy Agustien, tipping the midfielder's fizzing low strike onto the post.

Doug Loft did have a decent strike that went just wide for Vale, but Obika added a third for the Seagulls when he calmly beat Neal and tapped the ball into an empty net.

Inigo Calderon was forced to clear off the line after a goalmouth scrambled but apart from that one scare, Brighton eased home to take their place in Sunday's fifth-round draw.

"It was a monsoon when we started warming up and we thought it would affect the pitch and the downpours would put the game into jeopardy. It was difficult but it made for a good cup tie.

"We believe in the players we have and they're in the squad for a reason. We are proud of our youngsters and all of them scored today and that's very pleasing."

"Brighton showed their quality and adapted to the game well, but conceding two goals from set-pieces has cost us dear.

"I'm particularly proud of my players because they gave everything they had didn't give up at any stage.

"It was a very good cup tie in difficult conditions, but we've just come up short against a very good side.

"The FA Cup doesn't owe us anything because this is the first time this club has got to the fourth round for eight seasons."