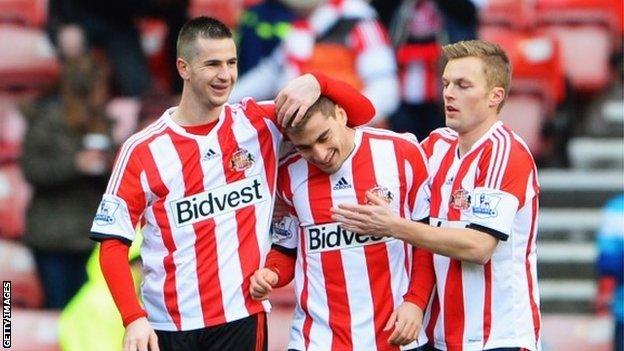 Sunderland made hard work of seeing off non-league Kidderminster Harriers as they scraped into the FA Cup fifth round at the Stadium of Light.

Top scorer Michael Gash had a great chance to equalise, only to shoot straight at debutant Oscar Ustari.

Freddie Ladapo then missed a great late chance to level on his debut.

Raking in the lolly

Even before receiving their half share of gate receipts from an attendance of 25,081, Harriers had already earned over £300,000 from this season's FA Cup run. They have picked up £125,000 in prize money alone. And that comes on top of the six-figure sale to Huddersfield Town of Joe Lolley, their third-round replay match-winner at Peterborough.

But the Harriers, 79 places below Sunderland in the English football pyramid, had every reason to feel proud of themselves.

Although they managed just one shot on target, their blanket defence restricted Sunderland to relatively few chances.

Sunderland made 10 changes from the team who stunned Manchester United on Wednesday night, only captain Lee Cattermole remaining in the starting line-up from the team that booked their place in the Capital One Cup final.

The visitors, by contrast, made just one change from the team beaten 2-1 at home by Dartford on Tuesday, on-loan Burton midfielder Jack Dyer coming in for Lee Fowler.

Harriers' best hope, roared on by their raucous 4,000 following from Worcestershire, relied on holding Sunderland at bay for as long as possible.

But the Wearsiders made an electric start, putting the Harriers defence under siege before forcing the error that triggered the only goal of the game.

And it came from Gowling, usually Harriers' most reliable defender.

He miscued his pass straight to Mavrias, who lashed home from close to the penalty spot.

This was the first ever meeting between the two sides

Following that frantic opening, it looked like the goal might be the moment that broke the dam. But, although Emanuele Giaccherini flashed a couple of efforts just wide, the expected onslaught never came.

El-Hadji Ba had a right foot curler fly just over before Sunderland boss Gus Poyet finally lost patience with his second string and brought on three of his midweek heroes.

But still they failed to find a decisive second goal and, with nerves starting to jangle all round the Stadium of Light, it was Kidderminster who finished the stronger.

But, in the end, it was Sunderland who go into the last 16, leaving Harriers only the satisfaction of their performance - and their half-share of an attendance of 25,081.

"It was not a classic. The only good part of the game was the first 20 minutes.

"Then it became boring and difficult to watch, until the last 10 minutes when they gave it everything.

"But credit to the other team. They should be proud of what they have done today.

"It will be interesting to see who we get next, but getting three points on Wednesday [at home to Stoke] is the most important thing."

"I'm immensely proud of my players. I thought they were magnificent. We looked like a League club. If that's not a springboard for our season, then I'll be very disappointed.

"We knew it would be really tough playing a Premier League side and, when we conceded so early, you know you're in danger of ending up with a cricket score.

"But, for us to be disappointed with not coming away with a draw and getting another crack at them speaks volumes for the performance.

"In the end, their keeper's pulled off a magnificent save to deny Michael Gash and Freddie Ladapo's had another sniff at the end. And that was all the difference between us.

"It was a proper cup tie. And the fans were unbelievable. They gave us fantastic support."