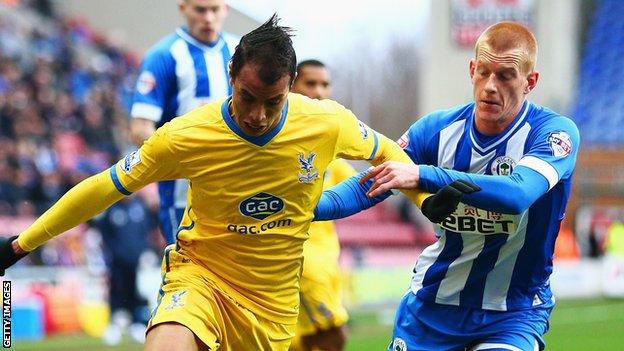 Palace levelled when substitute Aaron Wilbraham pounced on a loose ball inside the six-yard box to score with his first touch.

But the hosts dug deep to win through McClean's low shot from 15 yards.

The Latics upset the odds to beat Manchester City at Wembley in May and, while this victory did not rank quite on the same scale, there was still an element of a surprise as the mid-table Championship side secured their place in the last 16.

Wigan and Palace swapped divisions in the summer, with the Latics relegated shortly after their Wembley triumph and Palace winning promotion through the play-offs.

Matches between Wigan and Palace have been rare, with the Eagles making only their second trip to this part of Lancashire. Their previous visit - the first time the clubs had met - came in November 2005 and ended in a thumping 5-0 home win. It was a special day for Latics striker Andy Liddell, who scored twice to become the club's record goalscorer.

But for long periods it was difficult to distinguish any difference in league standing between the pair.

Wigan dominated the first half and Callum McManaman, one of the stars of the Latics' final triumph, was the source of the home side's most threatening play.

The England U21 international several times used his pace to skip past Palace left-back Jonathan Parr - carried off on a stretcher late in the first half with a serious-looking neck injury after a mid-air collision with McManaman - without being able to pick out a team-mate with his final ball.

But while he posed problems down the right wing, Wigan's opener was created on the opposite flank as McClean was allowed space to pick out the run of Watson - scorer of the winner in last season's final at Wembley.

Palace offered few glimpses of their attacking threat in the first half, but upped the tempo after the break.

Barry Bannan's inswinging corner evaded everyone in the home box as Ali Al-Habsi was almost caught out before stopping the Scot's set-piece on the line.

Wigan's opening goalscorer - and FA Cup hero - Ben Watson made almost 200 appearances for Crystal Palace between 2003 and 2009. The midfielder started his career at Selhurst Park before a £2m switch to Wigan.

Wilbraham pounced on a loose ball inside the Wigan six-yard box to lash in, just 150 seconds after he entered the action alongside Dwight Gayle.

And just moments later, Gayle almost put the visitors ahead, drawing another acrobatic save from Al-Habsi as Palace gained the impetus.

But the Eagles, who felt they should have been awarded a late penalty for a shirt tug on Gayle, were dumped out of the competition when McClean accepted Roger Espinoza's pass to fire in his first Latics goal.

"It is fantastic to be in the last 16 and who knows what can happen if we get a good draw at home in the next round.

"I think the win was deserved. The players did a very good job against a strong Crystal Palace side.

"In the first 10-15 minutes we looked a bit nervous but then Callum McManaman got on song and looked very good. Both wide players [McManaman and James McClean] did very well.

"We had a lot of opportunities to put the game to bed but we didn't do that. That's why it was nervous near the end, although I'm not sure Palace should have had a penalty."

"We're disappointed not to get something out of the game. We came to have a go and tried to win the game.

"When you play in Cup ties you need certain decisions to go your way. One or two decisions didn't go our way but that is what happens."

On Jonathan Parr's injury: "He has gone to hospital for a scan. We need to look at the incident again, but it looks like the lad has caught him. It will be interesting to see it again on the cameras.

"We think it was caused by the impact.

"[We're] not sure whether it is his jaw or his neck at the moment."