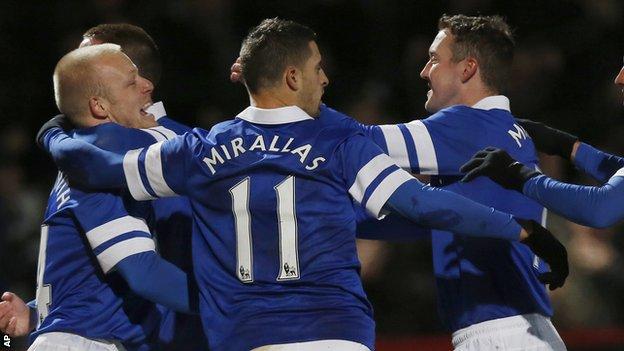 Everton eased into the fifth round of the FA Cup as League One strugglers Stevenage were comfortably beaten at Broadhall Way.

Steven Naismith scored twice in the first half to put the Toffees in full control before substitutes Johnny Heitinga and Magaye Gueye added gloss to the scoreline for Roberto Martinez's side after the break.

But Everton's satisfaction will be tempered by a serious injury to Bryan Oviedo.

The 23-year-old Costa Rican was stretchered off in the first half after suffering a double leg break while trying to block Simon Heslop's shot.

Players from both sides immediately indicated the severity of the versatile player's injury.

That setback apart, Everton coped well with a playing surface that was far from perfect to complete the job in a highly-professional manner and maintain Martinez's hopes of retaining the trophy he won with Wigan Athletic at Wembley last season.

Everton punished Graham Westley's side almost immediately when Kevin Mirallas's shot was turned away but Aiden McGeady recovered the ball to set up Scotland international Naismith for a simple finish.

Oviedo's injury forced a six-minute delay and there was sympathy all around the stadium as he was carried off.

Stevenage's early momentum had disappeared and Everton effectively wrapped the game up in the 32nd minute when Naismith pounced on a mistake by Jon Ashton to beat keeper Chris Day in composed fashion.

While Johnny Heitinga may yet leave Goodison Park before the transfer window closes on 31 January, the Dutchman was on target within 10 minutes of coming on as a half-time replacement for skipper Phil Jagielka

The Netherlands defender headed home an acrobatic overhead cross from the left by Mirallas, who had posed problems for the Stevenage defence throughout.

And as Everton closed out the formalities, Gueye gave the scoreline an even more emphatic appearance with six minutes left, riding challenges from Leon Osman's pass to roll in his finish.

Stevenage had occasionally troubled Robles and it took Heitinga to rescue Everton in a scramble at the death as both Roarie Deacon and Dean Parrett failed to turn in the loose ball.

"It was a real test and we always looked a threat on the counter. It was a performance that was as good as it gets when you take it all into consideration.

"We were brave, really attacking but the incident with Bryan affected everyone. Those injuries give you a bad taste.

"Steven Naismith is someone who has played that position with Scotland and he has very good movement. He showed what he can do."