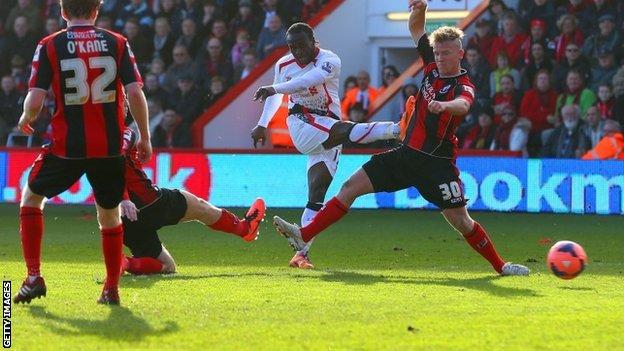 Liverpool are through to the fifth round of the FA Cup after goals from Victor Moses and Daniel Sturridge sealed victory at Bournemouth.

Moses found the net with a low shot from the edge of the area after 26 minutes while Sturridge fired past the advancing Lee Camp when superbly played in by Luis Suarez on the hour.

Bournemouth matched Liverpool for long periods but were restricted to half chances, with Andrew Surman, Harry Arter and Tommy Elphick all going close before Lewis Grabban forced a late save from Brad Jones.

Liverpool have never lost to Bournemouth in the FA Cup after being drawn against them three times.

In both 1927 and 1968, however, the Reds needed a replay at Anfield after being held in Dorset

At the other end, Sturridge lobbed an effort onto the crossbar, while Suarez forced a fine reaction save from goalkeeper Camp.

With the FA Cup representing his side's best chance of silverware this season, Liverpool boss Brendan Rodgers named a strong line-up, with Suarez, Sturridge and Steven Gerrard all starting in a 4-2-3-1 formation.

But it was Bournemouth, 16th in the Championship, who made the better start with Surman heading Marc Pugh's cross over the bar.

Arter's foul on the edge of the box gave Liverpool their first attempt on Camp's goal, but Gerrard curled his free-kick just wide of the angle.

The Reds were not to be denied for long, though.

After Suarez played the ball in from the right, Chelsea loanee Moses fired a low shot into the net through a crowd of players from the edge of the area.

The goal was harsh on the hosts, who immediately tried to respond.

Arter flashed a shot just wide of Jones's post from the edge of the area before Surman's shot was deflected over by Kolo Toure's last-ditch tackle.

From the resulting corner Elphick headed over from close range.

After the Cherries were guilty of overplaying in their own area, Jordan Henderson inexplicably fired over from eight yards after neat footwork from Suarez.

Arter later curled a shot from 25 yards straight at Jones under pressure from Gerrard as Bournemouth continued to press for an equaliser before the break.

The home side could have had a penalty after the restart when Martin Kelly pulled Simon Francis's jersey, but referee Lee Probert denied their claims.

Liverpool took full advantage soon afterwards when Suarez put Sturridge through. The England forward outpaced the Bournemouth defence and made no mistake as he fired low past Camp.

Suarez should have added to Liverpool's tally but lobbed over the bar when one-on-one with Camp while Sturridge fired straight at Bournemouth's keeper with the outside of his boot from a tight angle.

As the match headed into injury time, Grabban saw a toe poke from the edge of the area tipped over the bar by Jones, while Camp pulled off a fine reaction save from Suarez in what was the last action of an entertaining game at a sold-out Goldsands Stadium.

"The second half was more comfortable than the first. Bournemouth are a very good side so credit to them.

"The character was good from my team. A year ago there were games like this we may have lost, the mentality to up the tempo in the second half was excellent.

"Victor Moses was much better today. He has been working hard in training and he took his goal really well. He's quite laid back, he takes it all in his stride."