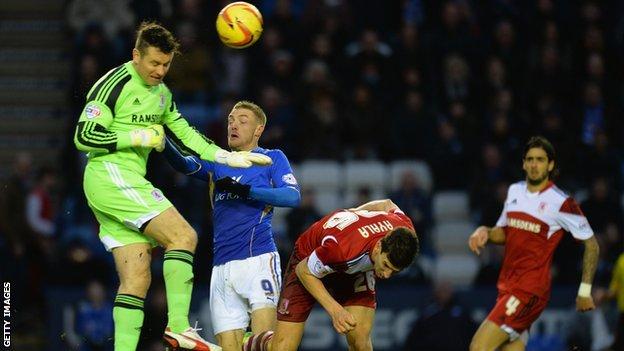 Leicester City eased past Middlesbrough to record a seventh successive Championship victory and move eight points clear at the top of the table.

Boro's Lukas Jutkiewicz wasted an excellent chance at the start of each half and the Foxes made them pay with a blistering second-half display.

A defensive error saw David Nugent tee up Jamie Vardy to crash in the opener.

And, after Nugent had a penalty saved by Shay Given, Ritchie De Laet's header sealed the win for the hosts.

The Foxes thoroughly deserved the victory, which takes them further clear of Queens Park Rangers and nine clear of third-place Burnley, albeit having played a game more than their main promotion rivals.

The last time Leicester won seven successive league games was in the 1992-93 season when their seventh win came against Charlton Athletic. Steve Walsh scored twice in a 3-1 success.

But they could easily have trailed early on against a Middlesbrough side who have climbed to the edge of the play-off places after five wins and a draw from six matches prior to visiting King Power Stadium.

Monsoon-like weather threatened to prevent the game getting under way, leaving puddles of water on the pitch.

But that was no excuse for Jutkiewicz, who missed the standout chance of a quiet first period.

Mustapha Carayol teed him up with a superb low cross in the third minute only for the striker to shoot wastefully wide from close range.

City's best first-half opportunity came soon after, but there was double pain for the hosts.

Liam Moore, a target of Fulham, narrowly missed sliding the ball home from Anthony Knockaert's cross and, to make matters worse, had to be replaced after crashing into the post.

Their hard work was rewarded with a much more exciting game in the second half.

Nugent, the matchwinner in last Saturday's victory over Leeds United, pulled the ball back to Vardy who was able to grab his 10th goal of the season with a simple finish.

Given then raced from his goal to prevent Vardy racing through for a second goal, but the striker's pace was posing plenty of problems and he earned a 71st-minute penalty when he was brought down by Rhys Williams.

Nugent hit his spot-kick well enough but Given dived to his right to save.

It mattered not though, as another foul by Williams on Vardy led to a game-clinching second goal.

This time the tackle was outside the area, but Matty James found De Laet with his free-kick and the right-back headed home at the back post.

"It was a very good win in difficult conditions in the first half. That probably suited them more than us because we were not able to play the type of football we have been accustomed to at home.

"But we stuck at it, limited their opportunities to a minimum and, as the weather improved, so did our effectiveness on the game.

"This season more than ever, we have developed a way of playing that has brought us good results. And I thought the players coped with the conditions pretty well and in the second half it was a decent game of football.

"Vardy did what he has been doing all season - occupying a back four, working hard and converting chances. It is a big plus for the side. His contribution has always been valued by his peers and this season his conversion rate has been better. His contribution was very good.

"We have now got 60 points from 27 games which is good going. The challenge now is to see it through and the players are determined to do so."

"Before the game I said Leicester were the best team in the league. I still say that now but they did not need any extra help from the referee.

"But we need to learn that if you concede the first goal or make a mistake you have to keep working in the same way throughout the game.

"We did well in the first half and had chances to score but in the second half they were more intelligent than us. They took advantage of the referee's decision and raised their game while we went down.

"We could have been better in the second half. The game is not over because you concede the first goal. We felt the ball had gone out of play in the build up to the first goal but that is no excuse."