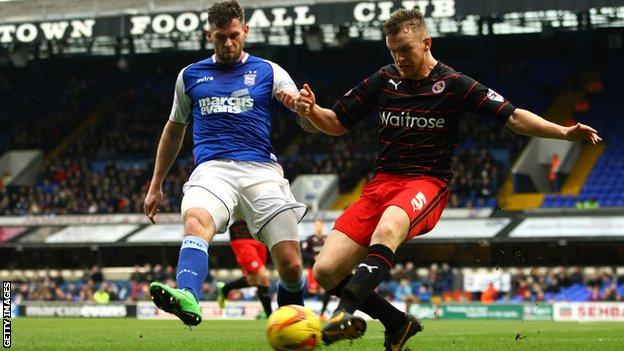 Ipswich recorded their first win of 2014 with a 2-0 victory over Reading in a closely-fought Championship game at Portman Road.

Daryl Murphy opened the scoring on 62 minutes with a powerful strike that went in off the underside of the bar.

And the hosts sealed the three points in the 90th minute through a right-footed strike from substitute Paul Anderson into the bottom left corner.

It was the Tractor Boys' first win in seven attempts in all competitions.

The last time Mick McCarthy's side celebrated a victory was their Boxing Day win over Doncaster, but they started strongly against the Royals.

Stephen Hunt nearly scored early on when his volley was cleared off the line by Kaspars Gorkss.

Referee Andy Madley was in the spotlight for denying Reading a penalty when their captain, Jobi McAnuff, was sent sprawling in the penalty area by Luke Chambers.

Reading continued to press and Daniel Williams had the best chance of the first half minutes before the break when his dipping shot from 25 yards forced an excellent save from Ipswich goalkeeper Dean Gerken.

Early in the second half, there was a goal-line scramble when Reading goalkeeper Alex McCarthy was wrong footed but somehow managed to recover to deny Ipswich an opener.

But the hosts eventually took the lead when Murphy scored eighth of the season.

The win was secured in the first of six minutes added on when Anderson confidently finished past McCarthy.

"We weren't particularly great in the first half but we were a lot better in the second half and we deserved the win against a good Reading side.

"It was an excellent defensive performance in the second half and keeping a clean sheet was great for them.

"The players were hurt by their performance at Millwall [a 1-0 defeat seven days earlier] so it was nice to come back with a win."

"I thought it was a good Championship game. We did really well in the first half. We were on the front-foot and competitive, but Ipswich were better in the second half.

"We kept going after Murphy's goal and had a few oohs and aahs but the second goal put the game to bed.

"I am looking forward to the second half of the season. The top two looks beyond us but we have players coming back and it will be an exciting end."