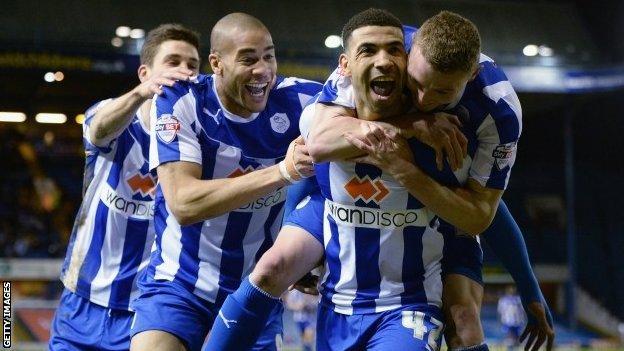 Sheffield Wednesday made it three consecutive home wins in the Championship with a well-deserved victory against 10-man QPR.

Chris Maguire scored a penalty after Richard Dunne was sent off for a foul on Leon Best, who found space to make it 2-0 in the second half.

Lewis Buxton sealed it from 16 yards after QPR failed to clear a corner.

Rangers lacked a threat throughout and are 10 points behind second-placed Burnley.

Wednesday sit in 14th, having leapfrogged Huddersfield and Leeds.

It was not until Dunne brought down fellow Republic of Ireland international Best in the 33rd minute that the game came to life.

Keeper Brian Murphy, making his first league start for QPR two-and-a-half years after joining the club, was sent the wrong way by Maguire. The Owls striker could have doubled his tally minutes later when he headed Liam Palmer's cross wide.

With the home side dominating going into the break, it was no surprise when Best turned his marker Nedum Onuoha and fired the ball home shortly after the restart.

Onuoha came close to pulling a goal back for the visitors as the hour mark approached - but after surviving two dangerous efforts from Wednesday forward Atdhe Nuhiu, Rangers soon had the game put beyond them.

Buxton flicked the ball over the head of Joey Barton before slotting the ball into the bottom corner. However, having already picked up a booking, he was fortunate to not be dismissed for celebrating among the supporters.

Murphy had to be alert to prevent any further embarrassment for Rangers and pulled off two good saves to deny Caolan Lavery and Jermaine Johnson as the match came to a close.

Sheffield Wednesday manager Stuart Gray: "It was definitely a penalty. But I was quite surprised the referee brought the red card out, so that maybe the bit of luck we had.

"But I still think we would have beaten QPR with 11 players. We wanted to win the game, we got men forward and we created chances."

QPR assistant manager Kevin Bond: "The issue is what has happened after we went down to 10 men - and we have spoken about it in the dressing room.

"There was a sense of inevitably about how the game was going to go. It wasn't the reaction we were looking for. We are all as a group hugely disappointed with what went on after the red card.

"It would be lovely to get promoted automatically but I accept it's a tall order."